Tomorrow it will be August 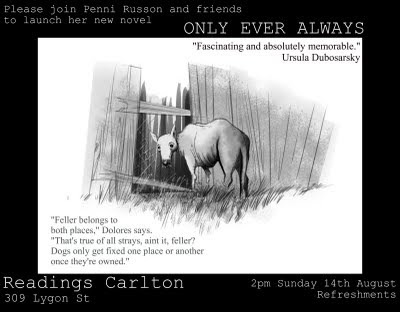 And a new month brings a new book. Come out and see me.
And if you can't come, you could buy a book, stand for about 30 minutes, eat a biscuit, smile and nod to someone standing next to you (real or imagined, kudos if you manage to get someone to do it with you), applaud politely, mingle and pretend you are there.
I will blog a little more about the book in the days to come.
thought up by me, Penni Russon at 7:27 PM 10 comments:

Una: Those lights were very bright in my eyes.
Martin: They were bright. I flashed my lights at him to tell him his lights were too bright.
Una: (thoughtful pause.) He or she.
Martin: Yes.
Una: Why do you always say he when you're talking about someone you don't know?
Martin: Do I?
Una: Yes, when you mean she or he, you always say he. Why do you do that?
Martin: Social conditioning.
Una: I know why Daddy always says he. Because he likes boys the best.

...
Una: I am going to close my eyes and dream about Raphael. I am going to dream he gives me the true love kiss and then we will dance the tango.
thought up by me, Penni Russon at 7:50 PM 7 comments:

Things we talk about before school

I get up. Fred and Una are sitting on the couch side by side. Fred is holding a giant rubber spider up to her face.
Fred: I'm hiding.
Una: From you.
Fred: Well not from you. From a person called You.

***
After watching Justin Bieber (Una is an out and proud Belieber and I suspect Fred is a closet one) on the Tubes I said, "Do you want to see someone I used to love when I was a teenager?"
They were both extremely keen on the idea. So I searched for the film clip of Never Tear Us Apart, my favourite INXS song. My goodness, what a festival of eighties New-Romantic glam-pop gender-bending aesthetic that is, I had to keep pointing out which one was Michael Hutchence and which the random wafting girl. And of course the whole thing is filmed in Prague. Of course it is. Wikipedia describes the song as "a sensuous ballad, layered with synthesizers and containing dramatic pauses before the instrumental breaks. Kirk Pengilly lends a cathartic saxophone solo near the end." You gotta love a cathartic saxophone solo. You just don't get that anymore. Music today. Etcetera. Everytime Frederique sings "I'm wearing all my favourite brands brands brands" a little part of me dies inside.
As I watch the clip I think how young Michael Hutchence looks, how soft in his jawline, how clean and safe.
"Did you really like him?" Una asks.
"Yes," I say.
"Really?"
"I like him," Frederique reassures me.
"Do you know the really sad thing?" I say. "He died."
"Was he old?"
"Not very old. About my age I think."
"How did he die?"
"Well, he was all alone in a hotel room. No one's really sure if it was an accident or if he did it on purpose."
"Maybe he was murdered," Fred suggests.
"Mm," I make a non-committal noise.
"Maybe," says Una with relish, "it's one of the world's last mysteries."
"Like Tutenkahmen,' says Fred.
"Yeah," says Una. "No one knows how he died."
But later Una comes up to me and says "I think he must have done it on purpose. If he was all alone in the hotel."
thought up by me, Penni Russon at 7:27 AM 7 comments:

Outside the morning is progressing. The sun creeps across your bed. Your parents mutter on the other side of the closed door.
‘I’m going to wake her,’ Dad says.
Not yet. You squeeze your eyes shut. It’s too soon.
‘No,’ Mum urges. ‘Let her sleep.’
Climbing the stairs are the steady, dogged tones of an arpeggio. There is no magic in the relentless rise and fall of these broken chords. This is earth music, hard music, the most grounded music there is. It marches into your dreaming, and though you try to hold onto the dream, you can’t.
You are awake.

From Only Ever Always, in bookshops August 2011
thought up by me, Penni Russon at 8:14 PM No comments:

With Martin
Kettle: boils.
Martin: from kitchen where he is scavenging bread. Were you making me a cup of tea?
Penni: Yes, I was! Do you want to finish the job?
Martin: Most of the work is yet to be done.
Penni: I boiled the kettle. I had the vision.
Martin: You're a big picture person. Big picture.
With Una
'I don't like him,' Una says (about her friend's mother's boyfriend). 'He looks weird.'
'Have you met him?' I ask.
'I've only seen a photo of him. B showed me a photo on her mum's phone.'
I have a premonition. I ask casually, 'Was he wearing a hat?'
'No,' Una says. She thinks about this for a moment and goes on, her voice clear as a bell, 'But I haven't seen a picture of him with clothes on. He was naked.'
'Oh.' The atmosphere thickens, well for me it does. Una seems oblivious. 'Was he going swimming?' I ask.
She shakes her head no.
'Was he about to get in the bath?'
Una puts a biscuit in her mouth and nods. All wide eyed innocence.
thought up by me, Penni Russon at 10:05 AM 3 comments: 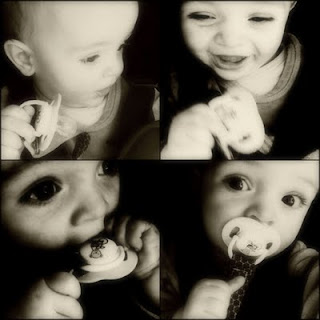 8 months, give or take a week.
He can wave. Maybe. He flails convincingly.
He eats nearly everything we offer him, though he is not fond of avocado or plain yoghurt.
He stores toast in the roof of his mouth which I find at the next breastfeed.
He has this funny panty noise he makes, and we make it back and he smiles and makes it again. It may sound like hyperventilating but to us it is the beginnings of a conversation.
He says "ahdare". Sometimes we take it to mean "oh, there." Sometimes it might mean Daddy. Sometimes we say it means "thank you." Sometimes it seems to mean "look, my dummy, would you like it? Actually I might keep it." Really I think it means "ahdare".
Sometimes he sleeps beautifully during the day. Sometimes he sleeps like crap. He has never slept for more than four hours at night (I am coping fine though). Lately in the evening, when we're watching tv, he will wake in the cot and cry. I lift him up or Martin does and carry him up to the lounge, where I will feed him or rock him back to sleep, and hold him in my arms. The weight of a sleeping baby is a particular pleasure, watching dreams ripple over his features is a private and intimate and fleeting joy.
thought up by me, Penni Russon at 8:06 PM 2 comments:

Martin is being very busy and important writing a book.
So the rest of us went to the zoo. It was free for kids. It would have been a reasonably inexpensive day out if I hadn't got a parking ticket. Turns out you have to pay to park at the zoo. I am sure I would have noticed that if I hadn't been busy wrangling three children on my own. OH WELL. 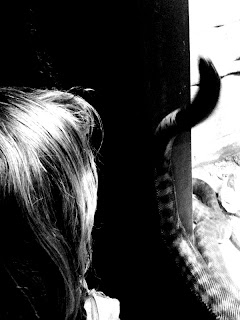 Snake charmer (I freaked Freddy out by telling her the snake was trying to hypnotise her. She never wants to go in the reptile house again. Which is a shame because it is my favourite part of the zoo. Also it was warm.) 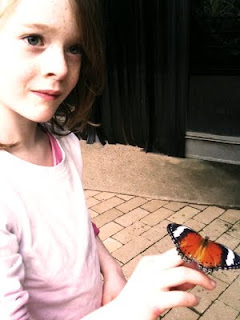 The butterfly house was also warm. This butterfly hung out with us for ages, allowing itself to be passed between the girls, then to another boy, then back to Fred again. Finally it flapped slowly away. It was either new (drying its wings) or very old. 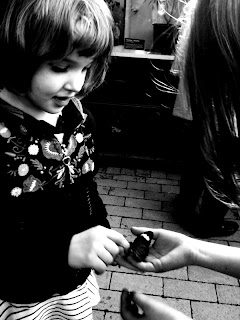 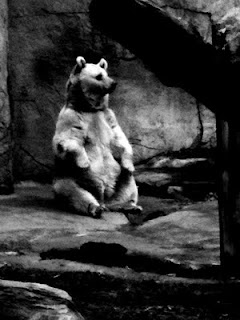 The bears I love the bears the best.

Just to prove he was also there, this is Avery in the butterfly house. He liked looking at the butterflies, but his two favourite things at the zoo were the people and the fat greasy pigeons at the caf where we sat and ate our sandwiches and peanut butter and white chocolate blondies (another holiday activity).

Yesterday we went to buy new boots but the shoe shop lady poked the toes of Fred's beloved old boots and declared them fine till the end of winter. Fred was extremely pleased and we saved, ooh, about the cost of a parking ticket. We wandered through the dark dim shopping centre to the scrapbooking shop to buy some paper for making with. They were doing classes and on a high from not spending money on boots I booked the girls into an afternoon class. 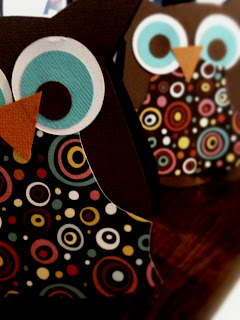 Oh the cute.
I also bought Fred a dress at the winter sale in the kids clothing store. She picked one out herself and I told her to try it on. She wandered into the change room, giving me strict instructions to wait outside. A minute later she came out, still wearing her own clothes, carrying the dress still on the hanger.
"Do I take off all my clothes and put this on?" she whispered. Yeah, we mostly get hand-me-downs.
thought up by me, Penni Russon at 9:27 AM 7 comments: I have a story Trick of the Light in July's Kill Your Darlings. Apparently they spelt my name wrong, but I have forgiven them because I am a magnanimous mammal.

Doesn't Kill Your Darlings look evil when you put fullstops in it? It's actually writerly advice from Faulkener - it basically means delete all extraneous writing (which is usually those frilly self indulgent bits, in my case it's nearly always in the form of a prologue or extended character thinkery).
thought up by me, Penni Russon at 10:10 AM No comments:

The Hardenbergia violaca
is awake.
It clambers the fence
and waves purple flowers.
Happy wanderer!

The dusky green haze of
wattle trees
on the high side of the house
is suddenly shocked with gold.

The sun looks down
on the early jonquils,
surprised to meet itself
in my winter garden.
thought up by me, Penni Russon at 1:33 PM No comments: