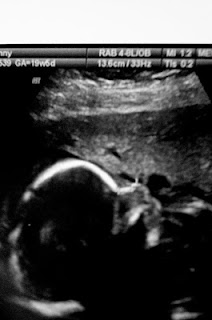 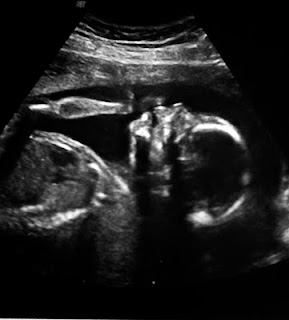 Twenty weeks. The scan was long and the baby was unco-operative, with his back to us for most of it, fast asleep.
"That's one relaxed baby you've got there," the sonographer said, poking my belly savagely, trying to get him to move.
"Can we have that in writing?" we asked.
The sonographer whisked around doing all her measurements, and as Una and Martin and I tried to puzzle out limbs and appendages, Fred would declare confidently, "There's a foot, there's a leg." And she'd be right. Una got bored and frustrated, I think she thought she'd be seeing, you know, the baby, instead of this fluid creature made of shadows and light.
The sonographer wanted to count the fingers and toes, and managed all but the left hand, which he stubbornly held in a fist.
"It's got a big head!" Fred cried. The sonographer laughed, but didn't correct her. I cringed.
Unfortunately after Martin took them out it got more interesting, though that may have been because I had the chance to take more of an interest. The sonographer sent me off to the toilet to empty my bladder and jiggle about a bit and I came back and the baby changed position, opening up his pesky fist, but waving his foot cheekily in front of his face. The student sonographer zeroed in on the baby's face and switched it to 3D, which is very strange and oddly brown and sepia looking and still fluid, but sort of thickly so. Yet every now and then there would be a clear flash that would take my breath away - there's his nose, his chin. His profile is very similar to Fred and Una's. There's a 3D photo too, but it's one only a mother could love. Anyway, I love the classic ultrasound shot. It's luminous and mysterious, shadows and light.
On the drive home, Martin asks a tired Una, "Did you like seeing the baby?"
"No," replies Una, grumpily. "It was too complicated."
All is well, anyway. And yes. It's a boy. 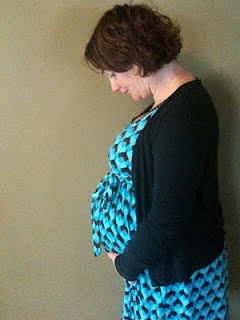 Which brings us to naming.
We've already decided the boy's name we had for Fred and Una - Gulliver - is probably out. I still love the sound of it, the feel of the word on my tongue. But not only is it rising in popularity, there is a Gulliver among the small clutch of children Una's age in our town. And I've used up most of the magic, names, we've discovered, don't always keep.
'What about Edward?' I say.
Martin shrugs. 'I like it, but don't love it.'
And same with Charlie, Laurence, Nicholas, Irving, Isaac (and it's cool nickname Ike), Asher, Satchel (is it a name? Is it a manbag?)...pick a name and we have picked over it. All perfectly good names, all lovely names, all names we like even. And yet. And yet.
We go back and forth. When the girls go and stay with with their Nana for the night, he reads me names out of a library book while I lie in the bath: Names for your Australian Baby. He discovers Toshio. He loves it. "This is it. This is the name." I like Toshi. I really do. I taste it on my tongue. I roll it around for days. Martin makes the mistake of airing it in public. "He has to live with that name all his life," one older relative says. She's worried that it's too different. We point out that Frederique isn't really part of our cultural heritage either. We say that it came from a book of names for Australian babies. In the end she laughs and says "Well good luck to you." I know she will love our baby whatever we call it, but this kind of sours the name for me. Do I love it enough to fly in the face of other people's disapproval? Why do I care so much? I am too sensitive to this sort of criticism. I intuitively feel like my parenting choices are being questioned, that we would name whimsically and without care for our child's possible future as a brickie's labourer/prime minister. With Frederique and Una, when we finally came up with their names, we sealed our mouths closed. I think it's how we knew, finally, that we'd come up with the right one.
"Benjamin,' suggests Una.
"But we have a Benjamin." (The girls' uncle.)
"Geoffrey," says Una. "John."
I like John, I am plainer in my tastes than Martin when it comes to boys' names. "Too plain," says Martin.
"Joe," says Fred.
"We already have a Joseph." (My sister's little boy.)
"Not Joseph," says Fred. "Joe. It's a completely different name."
"Not Joe," Martin and I say, though I am regretful. With my plain tastes, I like Joe.
Fred picks up the namebook. In excitement she exclaims, "What about Barry? It's Irish for "spear"!" We laugh. She's serious.
Una cries, after suggesting Benjamin for the fiftieth time, "You never like my names."
But Fred and Una don't like the names we suggest either. They are deeply, profoundly conservative in their tastes and will only consider names they have encountered themselves through creche, school or literature (Joe is from the Faraway Tree).
"What about Tolliver?" I ask Martin after hearing Tolly (in this case short for Bartholomew) on Poirot. There is a Michael Tolliver in Armistead Maupin's fabulous Tales of the City series. The more I think about the name the more I like it. It's literary, has a similar tactile presence to Gulliver on the palate of the tongue. Martin tries it on for size. A day or two later he says "I don't think I can do it." I nod. A little bit sad. Goodbye Tolliver.
Sacha. We agree on Sacha. We love the name. But has it gone to the girls? There is a girl Sasha in the wider family circle. Does it matter? On this we can't decide, we are equal in both our love of it and our ambivalence. The girls are more emphatic. "That's a girl's name," they insist.
Tonight Fred and Una carry names from me to Martin, in a sort of game - I suggest a name, they relay the message and bring me back Martin's danced gestures (to the Pet Shop Boys) in response, which are either positive or negative. Fred calls it our secret language and asks me breathlessly after each of her performances, "What does it mean?" Una is a censor, refusing to even ferry the name she doesn't like - Marmaduke.
And so the search goes on.

We are open to suggestions.
thought up by me, Penni Russon at 8:20 PM