1. When I was eighteen I shaved my head. 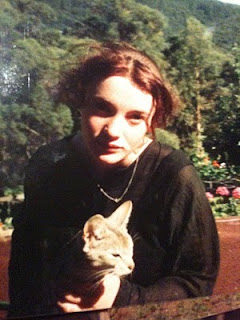 At first I just shaved the back (you can just see it in the above photo) and kept the fringe*. A few months later I shaved it all off and repeated this pattern every so often throughout my twenties. Below I am about 21 or 22. 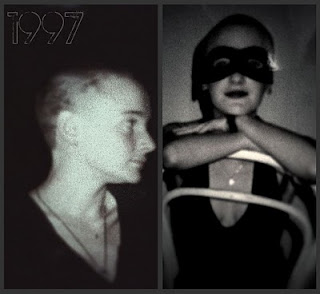 The first time I did it I rang my mum from a phone box on the lawn at Salamanca, Hobart, at dusk and told her (I was living in a townhouse in North Hobart, having moved out a few days before my 18th birthday). After a moment of silent anguish she said "At least you haven't got cancer."
Later she told me she'd gone downstairs and said to Dad, "What's the worse thing you can imagine Penni doing?"
Dad replied, "She's pregnant."
"Second worse."
"She's shaved her head."
Number two. Not drugs, or a cult, or elopement (well, ahem, at least I never joined a cult), or... well a million worse things. No. Second worse: shaving my head.
Why did I do it? Well, because of her of course. 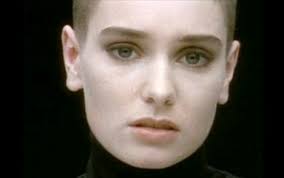 I had taped the song off Rage and watched it over and over again. And then I went on to discover more of her, song by song - Three Babies, Last Days of Our Acquaintance, Troy (in which she referenced my favourite Yeats poem*), and she ruled benevolently over my identity until I discovered The Waifs (in a pub, in Melbourne, *cough*, before they were famous).
Also it made me feel brave and free - I'd had awful haircuts as a teenager and was really quite frightened of hairdressers and the power they wielded, the ugliness they could inflict upon me (ugliness thy name is perm. And sometimes bob.). There was enormous self-empowerment in going the shave. I also quite often got around in a black petticoat and Doc Martens and fishnet tights. Black was my signature colour*.
Also it felt great, the breeze on my head was a natural endorphin kick, like the tickly scratch on her back which has never failed to calm Una down, like the light touch massage we were taught on Sunday in my hypnobirthing class.
*(x3) The word emo had not been invented yet.

2. A month or two back now, my mother was diagnosed with breast cancer. She has just undergone her first bout of chemo, and last week, over the course of a day, she lost most of her hair. (She was getting the rest shaved off yesterday). Not without some sense of irony, we've both been taken back to this old story that exists between us. It is a gift, in a way, that something so sombre can also have an air of lightness.

3. I did a workshop recently with a group of teenagers (about the relationship between character and parts of the body), and one of them wrote: 'Her identity was in her hair.' Hair is a huge part of our self image, so much of how we perceive ourselves is tangled up in that mass of colour and coif atop our skulls. After I shaved my head, my hair grew back thicker and more lustrous and for the first time in my life - and to this day - I had natural curls (there had been weather-affected frizz and several disagreeable kinks and cowlicks, but this was the first time I had honest to goodness curl).
Some years ago (somewhere between five and ten) my mother stopped dying her hair and let it grow in completely white. She used to have curls too, big fat ones as a child and teenager, but her hair had become quite straight. She had it done fairly often and usually had a hairdresser that she would stay loyal to - in the eighties it was a man called Ken, and she followed him from salon to salon, along with my best friend's mother. Ken must have been quite something. I remember one salon he worked in (perhaps he cut my hair once or twice), in Sandy Bay, next to a drycleaner, in an odd spot without any other shops around. Almost like a service station or a bottle shop, it had a "drive through" in front, probably for quick pick up of drycleaning.
I may be making all this up. About the drycleaner. I am quite sure about the hair.

4. Our first First Gentleman is a hairdresser.

5. Just before I fell pregnant I dyed my hair for the first time in years. 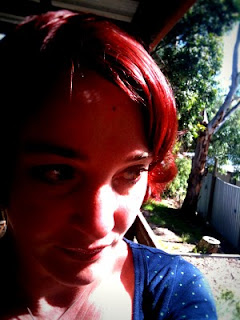 There is still residual colour. My hair has always taken colour well, probably because it tends to be a little dry and there is quite a bit of red pigment (I was a very gingery kid). It has been many colours: blue, blonde, black (yeah, that didn't work out so well), and accidentally greenish which it turns out is what happens when you put black henna over red bottle dye. I first got tips at 11 on a family holiday at the Gold Coast (Mum says Dad was in charge and she came back to find my hair dyed and Kylie's permed). They put a rubber cap on me and pulled strands of hair through little holes. I asked for strawberry blonde because that's what colour girls hair was in the American romance books I was addicted to (Sweet Dreams and Sweet Valley High). They were perplexed but came up with something. When I went back to school I said I'd been to the Gold Coast over the holidays and she said, "I can see the sun has lightened your hair."
"I had it dyed," I told her.
She gave me a withering stare and said archly, "I am sure some of it was the sun."
And hastily I agreed (she was that sort of teacher). She had two hair styles herself, a giant Barbie perm and a very tight ponytail with all her hair scraped back. She cultivated an alarming look, her eyebrows were also quite something, all four of them. She came back from holidays herself with the second style and all the girls in the class walked in, and then instantly stepped back into the hallway to claw at each other and gasp, "Did you see her hair?"

6. Sometimes I still think about shaving my head. Martin does a number Number Two fairly regularly, and as I neaten up the back I think how easy it would be, how lovely the air would feel swirling around my scalp. But somehow I doubt I will ever shave my head again.

Not by choice anyway. 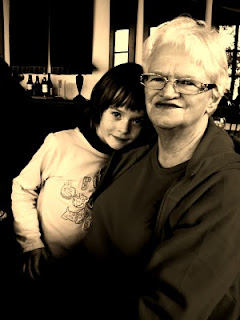