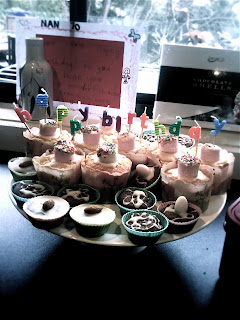 SCOUT'S* CUPCAKES
2 eggs
Cream
vanilla essence
3/4 cup caster sugar
1 cup SR flour
*Scout is the user name of the person who first posted these cupcakes. They seem to be somewhat legendary on the Taste forum.
**I actually timed this and realised I was quite bored of beating after one minute and thought it MUST have been AT LEAST THREE MINUTES OR OMIGOD FOREVER, so it was good to user the timer.
thought up by me, Penni Russon at 2:30 PM