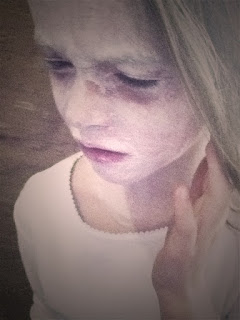 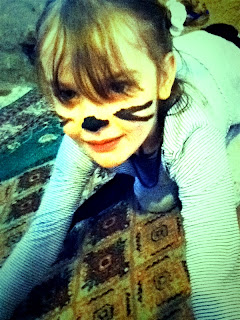 In St Andrews, as in many suburbs and towns all over Australia, kids go trick or treating on Halloween. My kids went last year as part of a group, up the main street with a couple of plucky parents. They asked to go again this year, this time just with me. I angsted about it. It's not part of our cultural tradition and it felt wrong to let my girls go round knocking on doors caging lollies off the neighbours (though I know that wasn't the main appeal - they just wanted to dress up and parade around the area). I said yes with all sorts of caveats, with a plan that I would email our immediate surrounding neighbours to forewarn them or that I would send the kids out with treats to deliver rather than simply to receive.
The reason I said yes (apart from the fact that an expectation had been created from last year and also because from the year we moved in) was because I more than understood that desire to go knocking on people's doors. My childhood bestie Zoe and I as kids would take any excuse to go rapping on people's doors. We had gone Christmas caroling one year for instance, another thing that is not really a tradition in Australia. And I like the idea of the kids being out and about. They have a good relationship with all the immediate neighbours, so the idea of extending this to the wider area is appealing.
Apparently in other Australian suburbs there are letter box drops and sticker systems to alert people that you're okay with them knocking on your door. But we don't have letter boxes in St Andrews (you have to go to the General Store to get your mail). And there was no point putting signs up at the Store since it wouldn't apply to most of the area - it's such a far flung suburb. And for the same reason we couldn't just include families from the school, as we have only 20 families and they live many kilometers apart.
Anyway in the end the same mum from last year rang and said she was happy to take the girls again and so, loving a cop out, that's what we did, drove the girls down to their place (opposite the school) and left them with that brave mum and a small gang of zombies and witches. They made it as far as our place and back again. I drove down to pick them up, but I was too early, they were still walking along the main road. So I ducked into the access road where they couldn't see me and watched them walk along, carrying their bags of spoils. Una lagged a little behind, tiring perhaps. She stopped to look at something on the road. Fred broke away from the group and tugged Una along. They caught up. There was something deeply satisfying about secretly watching them out in the world.
There were other gangs of kids out too, four of five small clutches, all dressed up. I drove up to the house where Fred and Una were headed. There were still a few houses for them to try so I waited with some of the mums out the front. One was spectacularly dressed up herself. We admired her soft brown curly wig. She said 'It even looks good without make up.' The girls came running back, wired on sugar, thrusting their stuffed, disintegrating paper bags into my hands. They had cups of jelly with them that someone had made, with lolly snakes crawling out. So. Much. Sugar. And just before dinner too.
Anyway, in the end I had totally changed my mind about the tradition. Instead of bothering the neighbours, I realised the girls were bringing joy to people who didn't get to see kids all that often, either because theirs had grown or they didn't have any. People had dressed up, had bowls of lollies, were waiting for people to come and knock on their door and would have been disappointed if no one had come knocking. I remembered from the year we went caroling (1986), one woman who was so overcome with joy and nostalgia and homesickness for England that she thrust a five dollar note into our hands despite our repeated protestations that we didn't want money.
Watching kids milling around, most unaccompanied by adults, reminded me of my own childhood, growing up in a bushy suburb. We door knocked for all sorts of reasons - sponsorship for walkathons and readathons, our Christmas caroling adventure, offering to do odd jobs, looking for my dog who ran away on a regular basis and a menagerie of imaginary pets and even just mooching house to house looking for someone to 'come out and play'. In a world where this doesn't happen anymore, partly because of a societal fear of some shadowy stranger who wants to do unnameable things to our children, there is a particular pleasure in seeing them dress up as the things that scare them and march up to a door to ask in a clear singsong voice "trick or treat?"
Though Una as a mouse didn't engender much fear. 'NO ONE was afraid of me,' she said at the end of it all, mystified, because isn't everyone afraid of mice?
thought up by me, Penni Russon at 8:50 AM