Did you ever hear of Mickey? How he heard a racket in the night? Because I can tell you anything you might have missed. I know ALL about it. 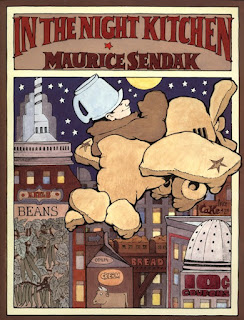 'Is it very different having a boy?' people ask me. Well, sure. I mean, he likes cars, balls, building towers; he's a mile a minute, climb the table, run away with the iPhone laughing kinda kid. But Una loved cars and still plays with blocks. Frederique was active and into everything. Avery likes drawing and music and Charlie and Lola. He likes to dance. He approaches drums with his hands already flailing in the air. He loves to brush my hair. At his new creche he rocks a baby in its cradle and says "sssh, sssh." He tries to give a real life baby a drink of water. Though he is not usually that interested in nurturing play, he nurtures us. "Are you all right?" he asks as Una sobs on the stairs, or calls to Fred wailing angrily in the bedroom. ("No Avery," she wails back, "I am NOT all right."). "Are you all right?" he says to me, if I lie down on the couch, patting my shoulder, stroking my hair.

If I have observed anything it is an aesthetic difference. It is a tension between our two bodies, because he is not me in a way that is clearly delineated. When Frederique was a baby (my first), all sorts of identity collapses threatened, and sometimes at my most tired and deranged, I felt I was parenting myself. A trace of that remains, sometimes I look at her and see my own face staring back at me, my own fears troubling her eyes, or - more delightfully - my own smile at the corners of her mouth. Though Avery's eyes are my eyes. His are brown like mine, rounded. Fred's are the mirror of her father's: the sea on a changeable day when the light is soft and intense and even one minute and blazing through clouds the next.

Avery has a penis. This in itself is a novelty to me. Sometimes when I open his nappy I say, "Hello penis" because it still takes me by surprise. From behind he is squarer than the girls were, at the hips, at the shoulders, under his bum. He is tubbier than Fred was at the same age (tubby, I suddenly realise is an adjective I am entirely comfortable using for a boy, but would hesitate to ascribe to even a baby girl.) I am told constantly, often by strangers, "Boys are so much more affectionate than girls." Una used to tell me she loved me all the time. She would seek me out for a cuddle. Fred loved to sleep in my arms. But admittedly Avery ups the ante. He flings his arms around me, snuggles in, kisses me on the lips. He is just as affectionate with Martin and the girls. Fred perhaps gets more kisses than all of us. Is this because he is a boy? Or because he has been conditioned by older sisters? Or because he has been in competition from the beginning for my affections, my attention? "Mummy" is one of his few clear words, and he shouts it across the room. From the girls he has learned the art of saying "Mum, mum, mum" to get my attnetion, even if he has nothing to say. 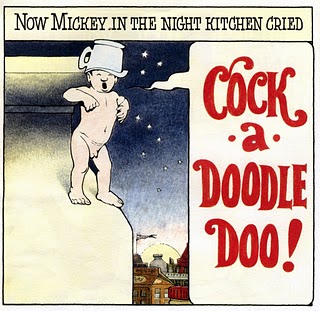 So did you ever hear of Mickey? Perhaps you've been living under a rock all these years, and you don't know this famous picture book by Maurice Sendak in which Mickey wakes up to a racket, falls somersaulting out of his clothes into a dreamscape where rotund bakers sporting Hitler moustaches are baking an oversized morning cake. They mistake Mickey for milk and mix him in. But Mickey is master of his own destiny. He makes himself a bread dough aeroplane and flies into the stars over a cityscape of bottles and cartons, watched over by full Mama moon. He dives into a giant milk bottle to retrieve the milk for the morning cake as compensation for his own refusal to be the milk. He brings back the milk so the morning cake is saved, but he also wins his own identity, he's not the milk and the milk isn't him, a fact he rejoices with a phallic Peter Pan-esque crow before returning to the comfort of his own bed. If you want, I can recite the story for you word for word. 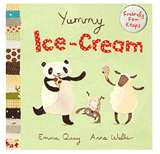 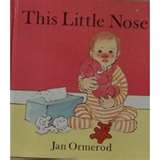 I admit Avery will tolerate two other titles, Yummy Ice-Cream has been a firm favourite for a few months now (I point to Panda, then Sheep, then Owl. "Freddy, Una and Avery," I say. "Yeah," says Avery with one long nod, as if the thought was just occuring to him too). And we've been reading This Little Nose to him since he was a teeny "poor little grumpy person" with a little red coldy nose. But In the Night Kitchen is Avery's book.

'What was my favourite book?' Una asks me as I read In the Night Kitchen one more time, and I struggle to remember one book that Una particularly loved - is it middle child syndrome (maybe Fred would never have permitted Una to dictate through preferences) or is it that she was simply eclectic in her tastes. Fred had a favourite book from before she was one, it was Rose Meets Mr Wintergarten; however, it wasn't to the exclusion of all others. But if we try to read another book to Avery he says "Hey!" (as in "hey, what do you think you are doing?") and hits the offending book. So it's Night Kitchen. Again. "One more," he says after the last page. "One more me baby."

It strikes me as I read In the Night Kitchen that Avery is a boy, Avery is Mickey in a way that my daughters have never been. The proud male body that struts is Avery's body. To a point. A round ended, bluntish point. I realise that Avery is subject in the way that the girls are never really subject in so many of our favourite books and movies and TV shows. Yes, yes, I know that Mickey is the sort of antihero we can all relate to, individualistic, fulfilling his own needs and happening to save the morning cake along the way. But his maleness is quintessentially part of his identity, part of the joy of his being. "Cock-a-doodle-doo" he crows.

"That is a very rude book," says Fred.

There's nothing essentially rude about a penis, I insist. "After all, Avery has one." But they are 6 and 9 year old girls. We will beg to differ on this one.


I had a brief flicker of envy at this sharp realisation. Avery is a boy. Of course, I am not suggesting this means his life will be necessarily easier. He may be marginalised in other ways: he might be gay, or acquire an injury or have a learning disability, or he might simply not fit with the social expectations of a white western male. As the brother of sisters, as the son of a feminist mother, as a male in a post-feminist era, he may feel he has to apologise for his masculinity, there are times it will probably feel a burden to him. But it's a privileged position to begin from, if for no other reason than he is born into the role of protagonist in so many stories, he will grow up without the confusion of identification that my daughters face, that I myself have always faced. For every Brave there are a hundred Toy Stories and he will own his place in them all. He is Peter Pan, he is Captain Hook, he is Indian Chief, he is Sherrif, he is President, he is Soldier, Sailor, Tinker, Spy, he is Old Macdonald, he is Policeman, Fireman, Postman. He's a pantheon of gods, of superheros. Of course there's no reason why my girls can't be any of these things too, and they have been, for a time, slipping in and out of these roles. But still. There it is. The body that sets him apart from me. Yes, the difference is mostly aesthetic to me, a feminist with the power to deconstruct codes like masculinity and femininity. But still, I am struck by what a powerful thing the aesthetic is in our image-driven culture where what things look like dictate their function, their purpose, their reception and the narratives that coalesce around us, bringing meaning to our past, shaping our destiny.
thought up by me, Penni Russon at 1:16 PM