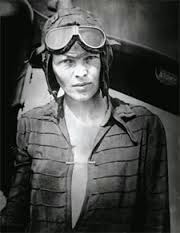 This conversation has been sitting in my drafts for months. The other day, after we'd time travelled into the future at a rate of 60 minutes per hour, Una tells me she'd like to work in a museum, because 'she's very interested in Amelia Earhart'.
thought up by me, Penni Russon at 10:43 AM