So life is chugging along. We are mostly in the moment, as people with small folks are, tending to daily necessities, laughing at the things they say (Una especially is a clown at the moment), worrying about lost socks and library books, going to school and creche, marking papers (me) and applying for jobs (mostly Martin). We have times of sadness, sudden spaces appear and we fall into them, but not forever. We have found distractions to skirt around these spaces - cutting our carbohydrate intake except at breakfast time, I seem to be rewriting a poem I've been tinkering with for over two years into a sonnet and I had a half-hearted attempt at putting together a new PhD proposal (didn't get it done by the scholarship deadline, but I have a proposal coming together that I am happy with), making grapefruit sorbet (Martin). Grapefruit sorbet is a neighbourly affair. He and Una picked the grapefruits of our next door neighbour's tree last week. Today, after churning it in the icecream maker, he took some up to Tim and Sally across the road who were clearing their block. Martin went over unannounced and to them must have seemed to spring up from nowhere, sorbet in hand. Tim looked up and said 'It's like some beautiful dream.'

---
This is not to say we are putting off the business of grief. Rather, grief and distraction are becoming part of the landscape of the everyday. It is not entirely unpleasant. We are enjoying loving the people we have lost, holding them more preciously in our heads. We are seeing the world through their eyes and grieving them and for them, for there is so much here to marvel at, tiny yellow flowers on the tomato bush (and the two tomato bushes that have somehow self-seeded in the flower beds, along with a wayward sunflower), the lushness of the pear trees, the joyful sound of a child breathing into a harmonica, the smell of coffee.

---
There is another grief, Martin and I are aware that this summer signifies an End of Days for us. Martin finished his degree a couple of weeks ago, and he is now looking for A Job (psst, anyone want to hire a remarkable English/ICT graduate teacher, preferably within 20 minutes drive of St Andrews?) Four long years of full time study are over. Una was an infant when he started 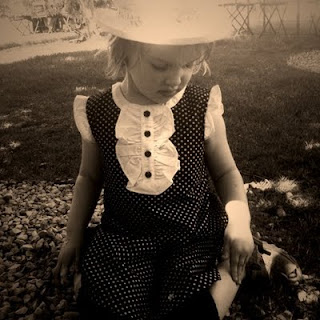 A Maid.
I am looking forward to what life has to bring (and if that should be polished floorboards, a coat of paint, a new couch and a gas oven I wouldn't object). But I am sad that time will no longer be our luxury.

---
We have had a week of heat and the flowers in the front garden are starting to frizzle. Lucky I took a picture before it happened, several actually, but this view from the kitchen window is a favourite. 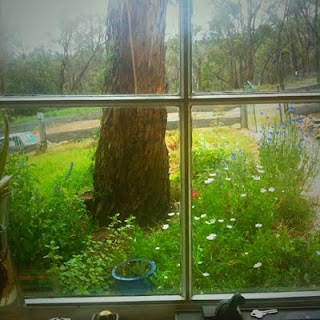 Bushfire season is no longer coming, it is here. We don't plan to stay and fight a fire (our old plan was that I would take the kids while Martin protected the house), our policy is to leave early, leave often, all of us together. Martin, after training all year with CFA, decided as his father was dying that his heart wasn't in it, at least for the time being. I am selfishly relieved. Una looked at him once, when he was all dressed up in his orange suit and hard hat and said, in a very small voice, 'Bye Dad. I hope you don't die.'

---
Una demonstrates the concept of Heaven for my mum. 'Lalala,' (this is the bit when you're alive), then cac cac (she makes a noise in her throat, which signifies dying) then 'YAY!' because you're in heaven with all your friends and family. Here is a re-enactment.

She does want a haircut really. But probably not a stupid one.
thought up by me, Penni Russon at 12:22 PM