I've been inspired to make my own bread using a no-knead method where you make a massive batch of dough and bake bread as you need it. Recipe and instructions here. The resulting bread is delicious and full flavoured with a good solid crust (crunchy and chewy) and soft white slightly sour interior. It really is easy, as long as you have room in the fridge. (I've just been using my biggest mixing bowl with plastic wrap over the top). 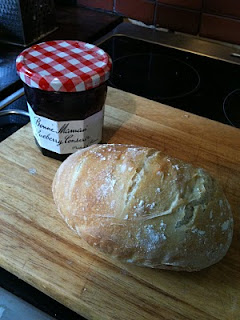 The girls made their own rolls for lunch today, stretching their piece of dough into a ball. Fred was disappointed that it was all over so quickly.
I actually used the dough to make a lentil roll like Kirsty described in the comments of a recent post, basically rolling/stretching/squashing out a loaf's worth of dough into a flat squarish shape (it was very rough, with thin holey bits and fat bits) and then spread a lentil mix leftover from making potato crusted lentil hotpot the other night and sprinkling with cheese before rolling it like the very ugly country cousin of a swiss roll. I didn't take a picture - it oozed and dripped lentils and cheese, but it had its own peculiar aesthetic charm. The kids devoured it. Fred had seconds after dessert.
We've been making our bread with organic white flour, and while that's the preference for Fred, Una and Martin, it's not great for me, as I am trying to stick to my low GI diet. I might have to experiment with some grains.
thought up by me, Penni Russon at 12:14 PM