I won an ice cream maker. It's fancy. A while ago I came to the food pornographer's blog via flickr (but I can't remember what I was looking for) and stayed a while, reading this gorgeous post about her family Chinese New Year celebration and desperately wishing she would adopt me. Anyway, she had a competition for an ice-cream maker supplied by Kitchenware direct, and I entered and I won! Me! And it was very exciting, because I don't often win things.

Although I said the first ice cream I would make would be an indulgent vanilla one made with eggs from our chookies to serve alongside the blackberries that grow wild in our garden, by the time the ice cream maker arrived (surprisingly prompt) and we'd finished the crappy ice cream we already owned, the blackberries were few and far between. After I announced my win on Twitter my friend Ess-jay linked to a stash of ice cream recipes she'd bookmarked on Delicious. The one that caught my eye was David Lebovitz's Brown Bread Ice Cream. The stars aligned, the ingredients were all to be had and lo, my first batch of ice cream was born, still using (of course) eggs from the chookies. (Speaking of the chooks, Fred has recently learned how to hypnotise them. It is a sight to behold.) 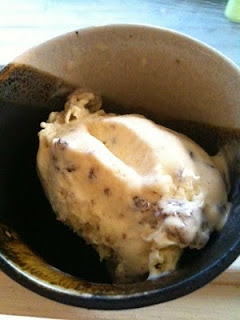 The best thing about this ice cream without a doubt is the crispy bits of bread. I thought they would go soggy after a day or two in the freezer but they have retained their biscuity crunch. The worst thing was not being allowed to sit in the pantry and eat all the sugary cinnamony buttery bread crumbs with a spoon. I used a whole grain bread from our local bakery. It's a lovely dense dark bread. I used light cream cheese and low fat milk (because that's what we had) and the ice cream doesn't seem to be compromised at all. I used low GI raw sugar with crumbs and, as David suggested, a mix of soft brown sugar and caster sugar for the ice cream. I had a moment watching the thin custard sloshing around where I thought "there is no way this is going to come together and be ice cream" but it did of course. The ice cream maker was great to use, it feels very sturdy with one big button and no fiddly bits.

I am still on my low GI diet, and have trained myself to eat ice cream out of a tiny bowl, one intended for dipping sauce. I get about two desert spoons worth of ice cream in it and I have to say, it's enough. Ice cream is an acceptable food in the low GI universe as long as it's not too sweet and not too fatty, the ice cream maker is great because I can control the amount of sugar I put in. We have three soft skinny bananas that are destined for great things this weekend. I am excited about more experiments, I have a lot of cooking mojo at the moment, but am sometimes disheartened by the fact that I can't eat too many sweets.. I see a lot of icy treats on our immediate horizon. Thank you TFP!
thought up by me, Penni Russon at 7:44 PM