A few weeks ago Fred and Una and I got separated on the way to school. At the corner of our street and the street that takes us down to the main road Fred ran ahead. It is not uncommon for Fred to run ahead and walk by herself and in fact last year she chose to walk to school alone a few times a week rather than drive Una to kinder, with never an incident. So at the corner I called out "We're going to go the back way" and Una and I set off on the hilly scenic walk, down the dirt road, under gum trees where parrots flit from tree to tree and occasionally you come across a quietly grazing kangaroo. It doesn't take much longer than the main road walk but for some reason Fred doesn't like to do it. Fred wasn't *that* far ahead and I assumed she had heard me, but I also assumed even if she hadn't she would keep running all the way to school and beat us there, as she often does.
Anyway, Una and I wended our way to the crossing.
"No Freddy today?" the guard asked us.
"But she's already crossed hasn't she?"
The crossing guard frowned, trying to remember. "I don't think so." But she wasn't sure, though there's probably only half a dozen or so families who regularly walk to school (there's only about 30 familes at the school, and many of them are too far away from 'town' to walk). Anyway, Una and I crossed over and looked around the playground. No sign of Fred. I wanted to leave Una with the pram so I could run back and look for her, but Una, also worried, wanted to come too. I was making a plan (leaving Avery and Una with Jools in the office) when Fred came hurtling into the school yard, tears streaming down her face, followed by one of the other Grade Two mums.
She was crying and shaking, still frightened, in shock I think. Seeing me safe and well, with Una and Avery, also made her a little angry I think. I took them into the classroom and then Fred and I went to the staffroom where I held her while she calmed down. It took her a long time to stop shaking.
"I called out," I told her. "Didn't you hear me?"
It turns out Fred hadn't heard me. She had run ahead to talk to Jake the dog. When I didn't follow she got increasingly worried. She walked back up the road, realised I'd "disappeared" and began howling.
"What did you think had happened to me?" I asked later, guilty, exasperated.
She couldn't tell me.
Anyway until Saturday I thought that the next thing that had happened was the other mum had picked her up, driven back to our place to see if we'd gone home for something and then taken Fred to school. But on Saturday night we had a progressive dinner in the area, moving from house to house to eat the various courses. It's not something I've ever done before, but Martin used to do it as a kid. It was a great night, a fundraiser for the school, and the cooking was exceptional - a few foodies among us I think (highlight was the slow roasted tomato tart with pistachio crust). It was an utterly charming occasion, like everything out this way, a little bit country and a little bit rock and roll. Anyway, during the soup course (one long table in the big kids wing at the school) I was sitting opposite Jake's owner and she told me of her encounter with Fred.
"Jake was barking this really weird bark," she said. "I knew something was wrong. It was very strange." 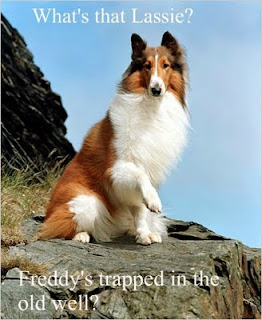 She came outside and found poor howling Fred.
"My mum's disappeared," Fred told her. Fred has dramatic tendencies and has a flair for following things beyond their logical conclusion. "She was right behind me and now she's gone."
This was when the grade two mum saw them talking and stopped to pick Fred up.
I apologised to Fred a few times that morning before I left her (I stayed in class for an hour to do some reading activities with the prep/one/twos) and again when I picked her up.
"Don't worry about it Mum," Fred said, but she looked hollow and haunted every time I brought it up.
We've been playing scrabble together on the iPhone and her iPod Touch.Okay, so it's not like in my childhood where a game of scrabble was a companionable hour or so with my Nanna, but I really enjoy playing with her. One of the best aspects is the chat feature. It's like a meta-narrative: 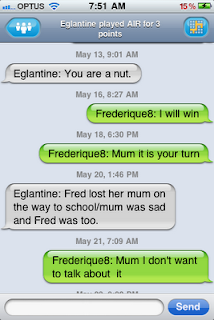 "Mum, I don't want to talk about it." That took the wind out of me. I wanted to talk to her. I like to think I am a persuasive talker, and I wanted to convince her of my version: she was never really in danger for a start. It was a misunderstanding.
"Are you angry with me?" I asked her that evening.
"A little bit," she admitted. Then, not looking at me. "I don't want to talk about it."
We've mentioned it since then, in passing mostly. This morning I told her what Jake's owner said about his unusual bark, she liked the idea that Jake had helped her.
You know it's not a big drama. If it's the worst thing that happens to Fred this year then she's a pretty lucky girl. And look at what a great community we have, how quickly she was cared for by other mums, and by the neighbour's dog.
It's funny these hairline cracks. So faint they hardly show. But it's a faultline (a fault line) between mother and daughter. It's part of the continental shift, the stretch and pull and collision and rupturing of our two selves. How can such a thing like maternal separation not leave scars? It's almost like this had to happen. Oh not exactly this, not necessarily this sequence of events. But somehow: the acting out of the conflict within, the dramatisation of the internal drama of the self in which the archetypes, mother and child, each play out their role, like puppets on a string. She had to know that one day she could turn around and I will be gone.
thought up by me, Penni Russon at 7:43 AM