Happy father's day to the two fathers in my life. 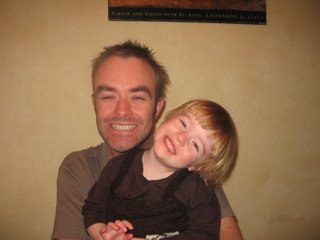 Martin is not my father of course but he is the father of my beautiful girls. They are very lucky girls to have such an attentive and present father, he shares the care equally of the girls - we have eschewed the notion of breadwinner in this house. There might not always be enough "bread", but there is lots of love and laughter. In some ways Frederique and Martin have a more complex relationship than Fred and I do, two firstborns, they sometimes lock horns. But she loves him and he loves her. Una loves to cuddle into him, both our daughters feel safest in daddy's arms.
Martin told me he didn't want any presents for father's day but I bet he regretted that at 5.45 this morning when he got up to Fred.
I don't know if fathers are born or made. I guess I always assumed they were made because I must admit that I never wondered about what kind of father he would be. The father he is though seems so natural that perhaps he was born to it - if anyone was born to be a father, Martin was. 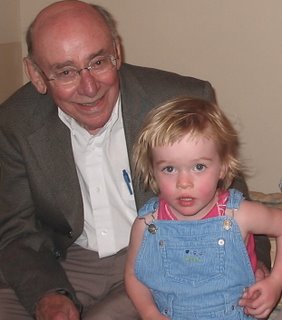 And this is Bob, my own father (this is him with Fred, not me but Fred looks a lot like I did at the same age); another man who makes fatherhood seem easy and natural - he has a special affinity with small children. Dad was a smoker when I was growing up which although it is a bad thing to be, it did mean that he often used to sit downstairs when I was a teenager and I would sit with him and he would tell me stories of his life before I was born. He taught me to love history, giving it colour and life - both the history he'd lived (he was in the British Navy during World War 2) but also the French Revolution, World War One, Ancient Greece and Rome...he is an avid reader and was a teacher. When I was cross and I shut myself in my room he used to write notes and draw funny pictures and slide them under the door and I would cheer up in spite of myself. dad remembers me writing 'I od not love you' but of course I od.

So happy father's day to both of you and to all other father's out there.