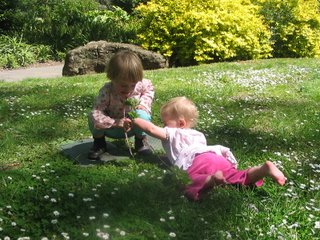 I'm very interested in the issue of wild play blogged about recently here and here. It's hard being a children's writer in this day and age where kids are so heavily supervised. People don't go to the country to convalesce with a well-meaning but abstract and vague aunt. Kids don't go camping by themselves or sail off for a summer or get abandoned in the woods. It's hard getting your child characters away from those interfering, prescriptive, restrictive grown ups and into adventures.

With my cousins, or Zoe, or other childhood friends, I wandered wild and free, not just over the bush suburb I grew up in, but also the inner suburban streets of North Hobart or Dynnyrne. Did we take risks? Yes. Did we ever get badly hurt? No (though both Zoe and I broke our arms, we both did it when at school or on a school excursion). The suburb I lived in had urban worries ('stranger danger', busy roads, bullies, roaming dogs) and bush worries (lack of footpaths, snakes, spiders, ponds, large tracts of bush, bushfires). We made up stories about people we saw or ourselves. We doorknocked for charity, for walkathons or looking for our escaped invisible pet mice. We roamed around the local university grounds as they were then (when the art school and conservatorium were down the road. We walked the 3 or so kilometres up to the signal station where we could see all over Hobart. Zoe and I often got up before anyone else was awake and took ourselves off to the park. We dug possum traps and bee traps, rode our bikes around the new subdivision, befriended ducks and all the time we were playing - a wild, unstructured kind of play, where every sentence began with 'Let's Say' or Let's Pretend'.

I loved my freedom more than anything. It was my most valued possession, my most precious gift. No barbie, no playstation, no toy, no equipment, could ever come close to that treasure - freedom.

I just wish I knew how, in the climate of fear and protectiveness we live in now I can pass this gift on. Is it a matter of moving out of the tightly held restrictions of the inner city? Is it a geographical problem? Perhaps it's partly a matter of teaching myself to reclaim my own wildness, of negating at times my adult status - can I make myself disappear for the girls, can I be a kid again? Can I take them places they can run wild and then let them run? Let them really run, without warnings or reprimand? I don't think it works like that. I wish it did. In a dream world we would have the money to buy the kind of big, unruly and dangerous house that could lend itself to wild play in the inner northern suburbs of Melbourne. In real life...I take heart that there are enough parents around me thinking about the same issues that maybe my kids will be able to roam free after all...without anyone ringing children's services. One of the other things we'll do to help encourage this kind of play is take them camping. We recently bought a tent. It makes me uneasy (more becuase I want my holidays to be relaxing!) but I think it will be great for all of us.