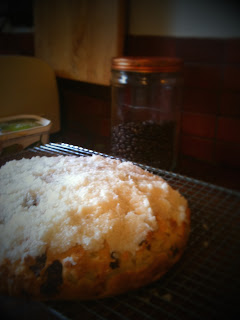 It's been a cleaning and a cup of tea drinking Sunday, a baby kicking on the loungeroom floor Sunday, a kids playing next door Sunday, a mop and milk buying Sunday. It's been a Sunday for grumping, and a Sunday for thinking about ordering bulbs, a Sunday for mooching between putting away laundry and sorting through the dress ups because I have finished my latest audio book and, like a jilted lover, I am not ready to start anything serious.

And so it's been a Sunday for baking.

Boston bun were a regular feature of my childhood weekends. In those olden days, shops closed on Saturdays at midday and weren't open again until Monday morning. The supermarket shop was done on Thursday or Friday nights (I also have resonant memories of late night shopping at Myer or Fitzgeralds or Venture in the city to buy perhaps wool for a jumper Mum was knitting, or a needed item of clothing - new tights, when I was older perhaps a dress for the school social). Saturday mornings were usually for the Hungarian delicatesses where we got cold meat and my sister fed her mania for double-salted liquorice. Perhaps we got bread there too, though my strongest bakery memories was a bakery in Sandy Bay Rd that had a door where you had to press a button to slide it open, very tricky for little fingers. Chances were that, along with crusty white sesame seed salami from the Hungarian deli in Magnet Court and crusty white rolls from the bakery on Sandy Bay Rd, Mum and Dad might pick up a Boston Bun. I remember discovering as a teenager that the key ingredient of a Boston Bun was potato, and I have a feeling this is not the first time I've attempted to make my own, though I can't remember any results of the first time.

We had some potatoes left over from our organic box of fruit and veg that we have delivered every Monday, and I thought this would be a fun way to use them up. I cooked and mashed three medium to large potatoes and that made about 2 cups of mash. This Boston Bun was a little doughier than the ones I occasionally buy these days from a commercial bakery, but much more satisfying. I didn't have allspice and missed it, also I only used big fat raisins, but sultanas would have been nicer, and some lemon zest perhaps. I put hardly any sugar in (a quarter of a cup of low GI raw sugar) because I still have diabetes paranoia, and I thought it was sweet enough, but less cakey. I added coconut to the icing mix in equal measures, rather than sprinkling it on top.

I'll make this again I think, if the girls enjoy it in their lunchboxes. It would be interesting, though not in the least authentic, to try it with sweet potato and I am definitely putting allspice on the shopping list this week.

Sorry the photo is so dark but it's that sort of a Sunday too
thought up by me, Penni Russon at 3:52 PM