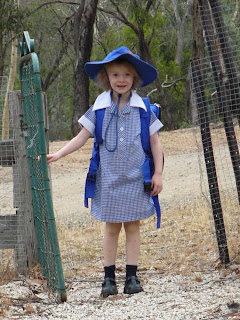 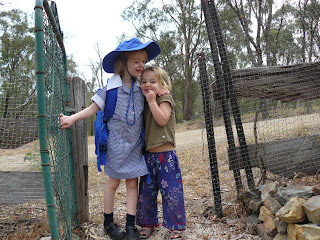 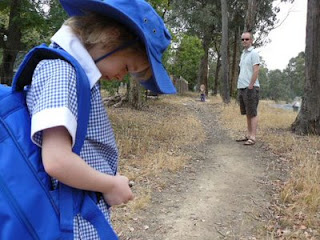 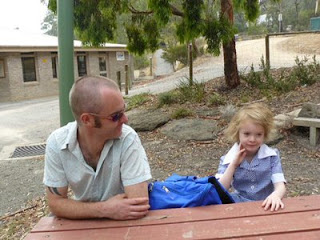 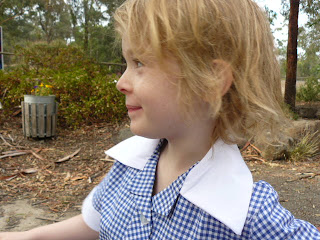 Early this morning we all left the house together. We walked the familiar route to the school - it's the same way I walk almost daily to the post office, and it's the way to the park and the market. This time we all saw the territory with new eyes. We said goodbye and left quite quickly, as soon as the kids were settled into the room, the paparazzi parents dispersed. Let the records state that I did not cry. I felt nothing but excitement for her and a wonderful lightness of being - I am no longer as responsible for every aspect of Fred's personal growth as I was yesterday. I get to share, yes I admit it, the burden of care for her. I get to hand over some of the intensity of her every waking hour. She is a resilient and powerful creature. I know she is ready for the world.
However, at 3.15 I walk down to the school alone to pick her up. I wait with the other parents, few of whom I know by name (even, I blush, some of the mums I know from kinder last year). All of the prep mums have older kids already at the school, I am the only newby. I am not exactly a foreigner (after all everyone is friendly and inclusive, and I've met everyone before, during orientation last year), but I feel slightly remote. A pregnant woman approaches, a week away from being induced. Everyone here knows her, sympathises with her about the fierceness of last week's heat. She is not someone I recognise, she's not a prep mum, her kids are all in older grades. I make sympathetic noises too, but say nothing. They all start talking about redback spiders nesting in their airconditioning units, again, I say nothing - we don't have airconditioning (yes, that was fun when the mercury hit 45 degrees last week), and I've never seen a redback spider, as far as I know. Fred comes out to use the toilets, hitching up her skirt before the toilet door closes and some of the mums laugh. The bell goes. Fred emerges from the toilets with two other girls and they all drift back in to the cloakroom, I remind Fred to get her bag. When she doesn't reappear I go in looking for her. She's discovered some show bag propaganda from the government. She forgets her schoolbag. I retrieve it. I know I will be carrying it home.
Outside she tells me that Milly, who was her buddy at the end of last year, isn't her buddy anymore. Fred is disappointed. So am I. I like Milly, who posed for a shot with Fred outside the school this morning. She has a new buddy, she tells me, but she can't remember her name. Apparently the new buddy hates Fred's name and hated Fred (Fred used the word hate). 'I think she's just mean,' Fred says, philosophically. My heart suckers closed, like a sea anemone. Later Fred says, 'But she likes me now. I fell over and hurt my knee and I think she was quite worried. She said Oh!' With Fred, it can be hard to get a straight story out of her.
Later, on the way home, Fred says 'Who's the best name of it all?' Still thinking of her so-called buddy, I answer reassuringly, 'Frederique.' 'No!' she says, 'the best black name.' I'm not sure where this question is going. We watched Hairspray recently, after Mamma Mia was such a big hit, and ended up having this terribly confused conversation about racism. 'What is it?' I say. 'God' she announces, with that reverent tone she keeps for talking about god (for new readers, this fascination is not new, but does not come from us, since we are a household of non-believers). 'God,' she says again. 'God has black skin.' What am I supposed to say? I answer with my usual vagueness:'Has he?' She looks at me. 'She. God is a girl. E told us today.' E is her teacher (they use first names, something I'm not 100% jiggy with, though I don't know why it bothers me). I am not sure exactly what transpired in the classroom, and though I know that for Fred, this story has some basis in truth, I also find it hard to believe that her new prep teacher, gentle, quietly spoken, turtle rearing, grey-haired E, smaller than most grade sixes (as I am) stood at the front of the room and said, 'Class, God is a black woman. Hallelujah.'
On the same walk home we also covered what people ate with in the olden days, you know, before forks, whether Fred was alive in the olden days, and if she would go to heaven one day, and just exactly where heaven is.
Although I didn't cry this morning, my stomach is churning. What happened with her buddy? Why were they talking about God in the classroom? This is it, I suddenly know. It's started already. She's entered a world almost beyond my scrutiny, and like a bird I can only survive on the breadcrumbs she throws me.
Later as I'm making her lunch I realise some of the novelty has already worn off. I see a string of endless lunches unfolding before me. There will be other girls like Fred's buddy, who will make fun of her name, or dislike her for no reason and not all of them will be so easily charmed. This is the long haul. This is the future. It's already here.
thought up by me, Penni Russon at 9:56 PM