I have a memory of going to get my haircut, I don't know if it was one particular time or an aggregate memory. But a grey gloomy Saturday, trudging around Magnet Court in Sandy Bay to the hairdressers. I remember what it was like to sit on a board, get swamped by the big ugly cloak thing and have my head yanked around. I remember the sensation of sharp scissors poking my ears. I don't think in all the years I was a kid that I had a haircut I loved, in fact I pretty much always hated the short 'sensible' haircuts I ended up with.

Today Martin and I finally got ourselves organised and took the kids off for a haircut, after some cnsultation with the kids (Una wanted hers cut very short like Finn at creche - over Martin's dead body, but I was thrilled by the idea - and Fred was saying short at the front and sides and long at the back...um, you mean, like a mullet?). We made a last minute appointment at Doncaster Shopping Centre, but when we got there we quickly realised that there was no way we were going to get a park, cars were streaming in to each section and the only ones coming out were people like us, who'd done a few laps and were driving onto the next carpark. Having already driven through a deserted looking Main St Eltham we decided to go back and try our luck. And I'm so glad we did. This place was great. It was a big groovy proper grown up hairdressers with two seats at the front that I think is especially for kids (without any kid crap). Although it was busy, they took us in straight away. The girls had a hairdresser each and sat side by side on cool leather chairs that winched up and down. They loved it. And both were very happy with the results. This is really Una's first haircut. It's Fred's third or so, but the first time we've had such an attentive hairdresser who seemed to really understand Fred's hair. 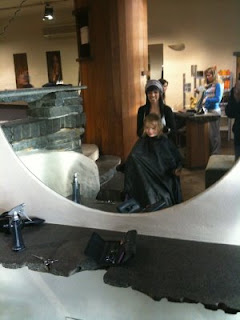 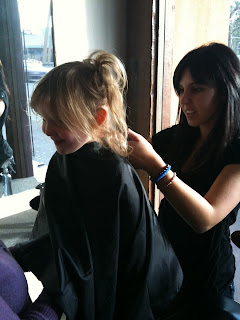 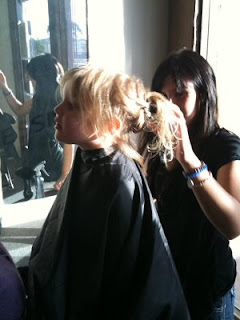 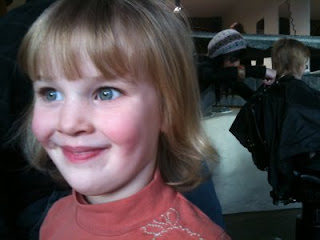 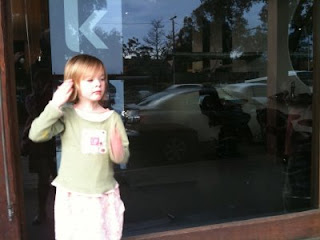 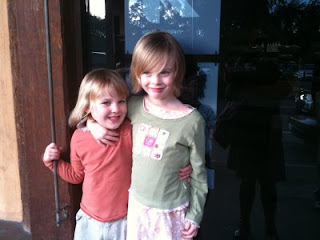