Oh So Quiet
It's quiet today. Fred is at creche. Martin is at "ooni". Una is asleep. The only sound is the tap tap tap of the keyboard like jazz (the bad kind) - I am a terrible typer (typist? Sounds too much like I know what I'm doing). Anyway, quiet day...perfect for writing? I suppose. But I am feeling reflective rather than writerly.
There goes my quiet. The baby's awake and a plane just landed on my roof. If I ignore both perhaps they will go away.
I wonder what Eglantine is doing today? I think she's a dizzy-whizzy girl. Fred has started spinning when she's angry. It seems a strange way to express herself, to communicate frustration but there you are. She turns in circles and stamps her feet.
Una says Mama. Not mamamamamum, not babbling. She looks me in the eye and says 'Mama'. It must be a survival instinct because the very first time it happened I decided we were definitely keeping her. And just think, one day she might become an angry spinner too. I love them both, the angrier Fred is the more I love her. Every night I want to slide into bed beside her, rub her back while she sleeps (but she would just push me out and say 'go go go'... She likes to listen to music in bed at night and the second the cd goes on we have to leave. 'Kiss!' she says. Then 'go go go!').
There you go. The baby sleeps again. The plane has passed by.
Can you believe it, Una is 8 months old and I am clucky again. There is a reason for this, I make these incredibly beautiful babies that grow up to be angry spinners (and if you are going to be angry then at least make it into a dance). Another baby...one day. One day.
This time the baby truly wakes. No more quiet.
thought up by me, Penni Russon at 4:03 AM 2 comments: 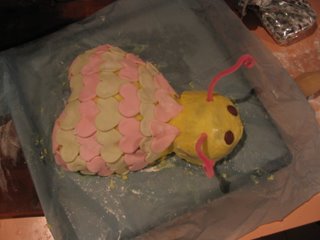 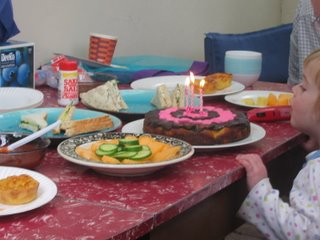 Two more cakes (finally)
I have sorely neglected my duties here (though I think I've only told four people about the existence of my blog - anyone else who is reading this has either stumbled here by accident - you must look where you're going or you'll hurt yourself! - or has followed my sig link on the Thorn Tree, the place I go when I need to procrastinate the most). Still when a writer neglects other things you can be fairly sure there's some writing being done and I feel like I am over a bump in the Rise road, Undine 3 will live. It's taken some surprising turns for me, I am very interested in where my characters are going. Phoenix is remembering fire, Undine and Grunt have found each other again, Trout is attracting interest from a nice, relatively normal chick. Prospero is dying in two halves...in one world he has Undine, but does not know her. In the other world he is surrounded by people who care about him but he longs to see his daughter one last time.
I am also putting in an application to do a Masters at Melbourne Uni - though I have left it rather till the last minute unfortunately. Also put ina literary grant application.
Since I last blogged I went to Sydney for the presentation of the Kathleen Mitchell awards (congratulations to Marcus Zusak who won for his expansive novel The Book Thief, it is in my pile of books to read...I am looking forward to getting stuck into it.) Part of the presentation was a panel discussion about being a young writer in Australia - absurdly Marcus was the only one on the panel who actually IS a young writer in Australia. Alex Miller (he had his first book published at the age of 50), Fiona Inglis, an agent from Curtis Brown and Linda Funell, a publisher at HarperCollins Australia were the other three panellists. The discussion was fairly pedestrian unfortunately, centering around the faintly patronising assumption that most young writers are not actually very good - they don't read, nor proofread their own work, they aren't technically proficient. In my experience (not just as a writer but also as an editor and reader of unsolicited manuscripts) few people finish writing a novel if they don't read. Most writers do read, most writers are driven by their love of books and the written word. I'd say that writers who don't read are an exception rather than the norm. I was disappointed overall, I felt like all they were doing was perpetuating stereotypes and reaffirming the (actually quite wrong) notion that publishing is a closed shop.
In other news, we bought a sewing machine and I plan to make lovely little toys like loobylu and all the other amazing bloggers out there who make softies (look up softies and blog in google or softies on flickr and you'll find a whole incredible universe.) I have also FINALLY taught myself how to knit. Cast on and knit anyway, I am a casting on fool. Casting off is yet to be mastered.
Peace and love everyone (all 4 of you).

And if you've stumbled here by accident, stop and say hello!
thought up by me, Penni Russon at 10:23 AM 1 comment: