It was early evening when my journey began. The train was full, but not yet uncomfortably full, of people going home. It is important to insist – you will see why in a moment – that I was under no illusion about them. If anyone had asked me whether I supposed them to be specially good people or specially happy or specially clever, I should have replied with a perfectly truthful No. I knew quite well that perhaps not ten percent of the homes they were returning to would be free, even for that one night, from ill temper, jealousy, weariness, sorrow or anxiety, and yet – I could not help it – the clicking of all those garden gates, the opening of all those front doors, the unanalysable home smell in all those little halls, the hanging up of all those hats, came over my imagination with all the caress of a half-remembered bit of music. There is an extraordinary charm in other people's domesticities. Every lighted house, seen from the road, is magical: every pram or lawn-mower in someone else's garden: all smells or stirs of cookery from the windows of alien kitchens.

Remember how I mentioned Kate and I were both shortlisted for the Children's Peace Literature Award? Well Kate won it! Along with Christine Harris for Audrey Goes to Town (a book that has been on my radar to pick up for Fred sometime. And yes, when I say 'for Fred' I really mean for me. It seems to me that it might have some aspects in common with some of my favourite books for kids, such as Robin Klein's All in the Blue Unclouded Weather and its sequels, and also Thurley Fowler's beautiful books The Green Wind, The Wind is Silver and A Horse Called Butterfly...)

Anyway, I am so excited for Kate, she deserves it. We had lots of conversations about faith and God as she was writing Winter of Grace and I know what a journey it was for her to write it. Also kudos to Allen & Unwin that not one but two Girlfriends were actually on the shortlist (the other being Cassie by Barry Jonsberg - I delivered him from the furnace you know...well, from the slush pile...though if it hadn't been me someone would have snapped him up, because he has serious pathos up the wazoo).

Kate's house is full of domestic, chaotic, noisy peace. It is one of my favourite places in the world to be.
thought up by me, Penni Russon at 9:04 PM 1 comment: 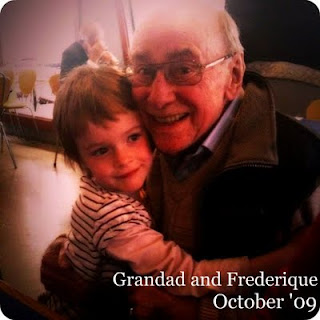 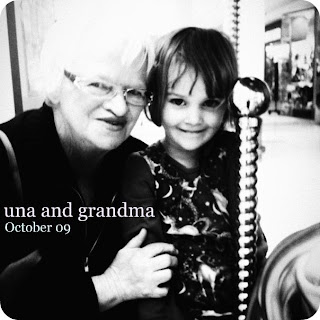 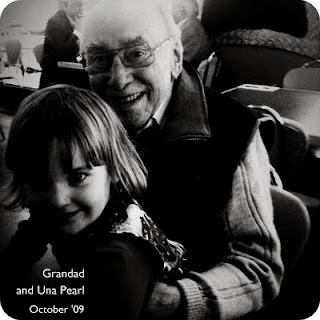 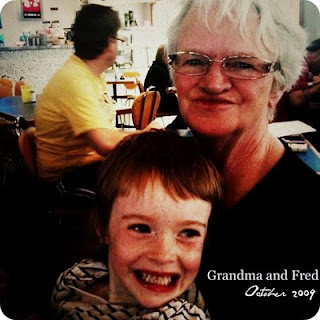 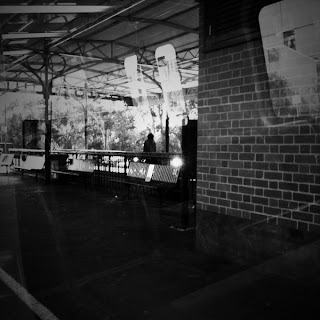 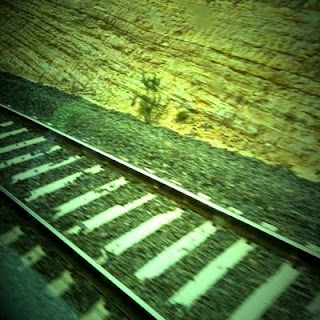 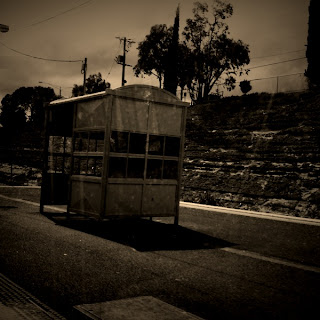 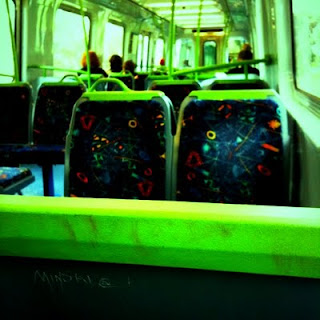 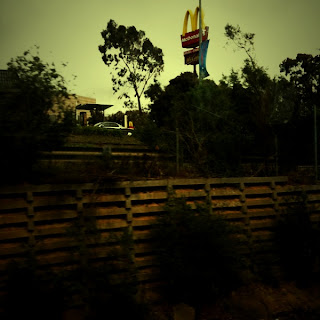 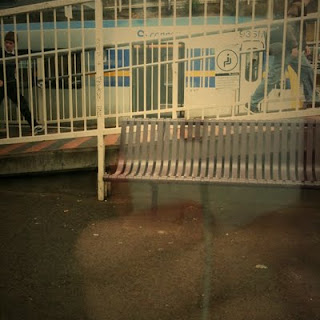 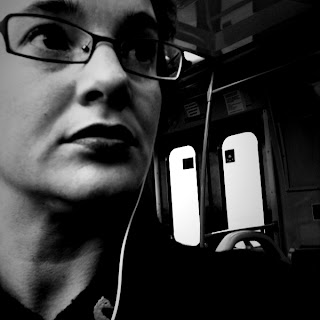 Until I am the last one left in the carriage.
______
These photos were taken with my iphone using the Toycamera application, which applies a random filter to your photographs.
thought up by me, Penni Russon at 1:23 PM 7 comments:

In the face of it - peace

It is strange how normal life proceeds in the face of death. Valued Opinions sends another survey:

We have a new survey available for you to take. If you qualify and complete the survey you will receive $1.50.

I want to ring them. I want to say 'Don't you know someone has died? How can I care about consumer goods? What is the point of $1.50, in all this world with all its pain and loss?' I quietly delete the email.

On Friday evening, after a long day holding it together at uni, in the company of people who did not know him and have failed utterly to notice his absence, my children fight at the dinner table. I hurry to assure them my tears aren't because they are fighting. I am crying because we live now in a house of grief, and I don't know how to find the time and space for it, or give them the time and space they need. Our house is small and suddenly feels crowded. Everyone grieves in their own way. We spend a weekend outdoors in the sun. It seems important. Carrying Una back to the car along a bush track, she leans her check against my shoulder and says, 'I'm sad about Papa.' We talk about what we miss most. Fred says his jokes. She is the only one. Miles told terrible jokes. But I will miss the way he told them. Thinking about the glimmer in his eye makes me smile. Fred has inherited Miles's love of jokes.

The phone rings, emails appear, I go to uni, I buy groceries. Life goes on. Things proceed as usual. As I write this post the phone rings again. It's Kate. And she tells me Josie and the Michael Street Kids has been shortlisted for the Children's Peace Literature Award, along with her book Winter of Grace. I am so happy for her. I am happy for us. I am happy for Josie, such a small book out there amongst giants, a quiet book about the power of stories to connect people together and to heal broken hearts. A story about our own personal maps, how we inscribe ourselves on the places we live, and how they inscribe themselves on us. A story about the last days of childhood, on the cusp of the long hot summer that marks the year between primary and secondary school. If this book has put some peace out there, into the world, then my heart is overwhelmed for a moment with joy.

It is a funny thing how, as an adult, just when you think you're done with being parented, you acquire a second set of them. And it's complicated, learning to love them (especially because you're kind of done with being parented), but in some ways it's instinctive too, because they made the person that you fell in love with. And at first the relationship is kind of arbitrary, you know. You like them and they like you, and after a while, like even becomes love, because you love your husband, and that includes loving all the people that are enmeshed in his life. Then you have babies and the connection becomes a blood one, because their blood, their DNA, is so clearly present and accounted for, mingling and mixing with your blood and your DNA. And so many people become connected up, branching outwards, so that through your children, the shape of your family tree changes.

And then one day if you are lucky you realise that, even if there was no blood connection, you'd just want to hang out with these people, because they make you happy.

Here is a strange story about connectivity, and I hope I get the details right. It's a bit of headspinner. Before my father-in-law, Miles, married Catheryn he lived in a shared house in Melbourne with a man named Bert (who ended up marrying Janet, Catheryn's younger sister.) During this time my own mother was boarding with Bert's father in Tasmania. This connection was only uncovered years later, last year in fact, ten years after Martin and I had met.

I don't think I ever told Miles that I love him. I also never said a final goodbye - in fact I was on my way to the hospital when Martin called me. I pulled into a country road, next to a paddock where a woman was training her horse, to take his call, and after we both hung up, this is is where I cried. But it doesn't matter, about that last goodbye. Every time we said hello and goodbye, we kissed, we hugged, and the frailer his body became, the firmer those hugs were, from both of us. He knew he was loved, not just by me but so many people. 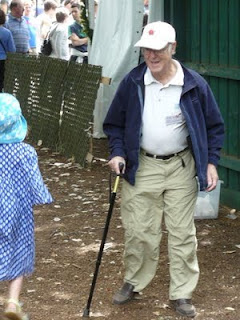 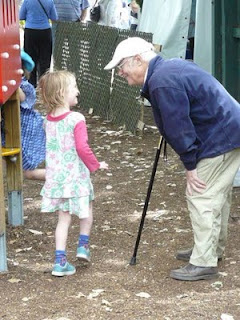 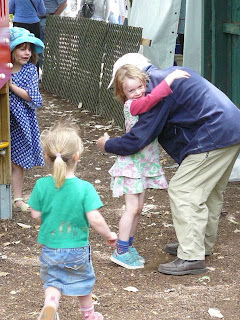 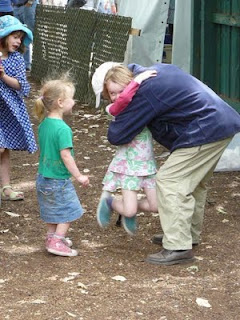 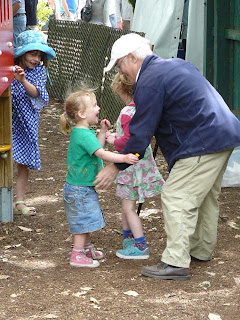 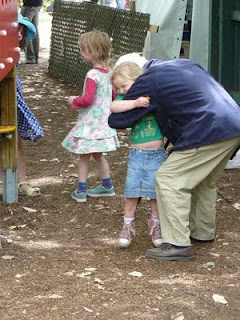 What would Freud say?

Una: 'I hope I have a penis when I grow up!'
Me: Do you have penis envy?
Una: (Looks at me quizzically) Nah, not really. (Pause) I'm not really going to grow up.