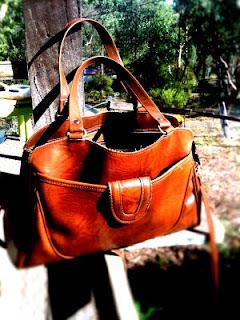 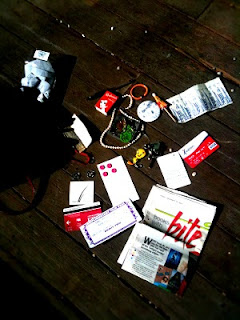 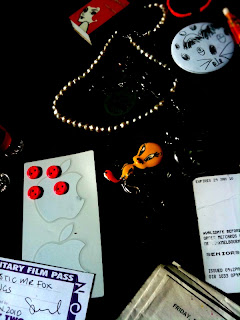 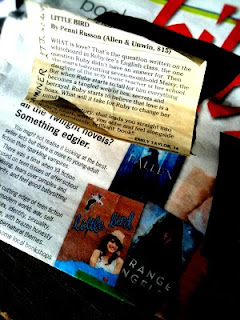 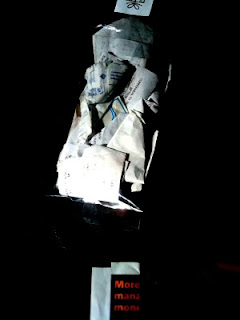 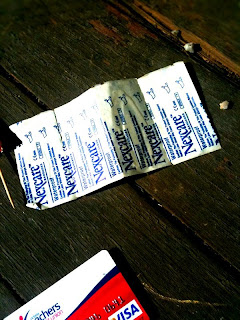 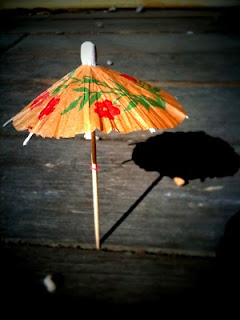 What's in your handbag?
thought up by me, Penni Russon at 2:10 PM 8 comments:

via Cassandra Golds, one of my favourite facebook besties.
thought up by me, Penni Russon at 12:43 PM 1 comment:

More about me here, posted by the lovely Tansy Raynor Roberts.

Yesterday Kate Constable and I went to the Younger Sun Bookshop where another lovely Kate runs a YA book group. It was awesome. Dear Swoosie was their February novel, but between them they'd read a lot of our books.

They were passionate, articulate, funny, friendly, comfortable, noisy, radiant girls and I liked them all very much. It was a giddy afternoon, so great to meet a bunch of voracious readers, exhausting keeping up with the conversation, which ranged from psycho homeroom teachers to crazy busdrivers to who was marrying who on the Gilmour Girls and school libraries. Most of all it was fun just to spend some relaxed time with young people who choose to hang out with the characters we create, and to hear about the other books they love.
thought up by me, Penni Russon at 9:22 AM 4 comments:

There is a review of Dear Swoosie here.

I have a twitter/blog/writer crush on Karen Healey. I am hanging to read Guardian of the Dead.
thought up by me, Penni Russon at 10:29 AM 2 comments:

Buzz. Buzz buzz buzz.
Buzz is background noise.
Buzz is the conversation in another room.
Buzz is the interruption of a doorbell or phone.
Buzz murmers. Buzz hums.
Buzz is to summon someone you don't really want to speak to but have to out of necessity, like when you're checking into a hotel or paying a fine in the council chambers.
Buzz is what bees do, or a nest of wasps.
Buzz is a mind overfilled with thoughts.
Buzz is an aeroplane, that flies too close.
Buzz rhymes with fuzz.
Buzz rhymes with does.
What does, Buzz?
thought up by me, Penni Russon at 11:31 AM 1 comment:

And I shall call this day Thursday*

For the last three years or so, ever since I stopped breastfeeding Una, my periods have been erratic and unpredictable. My cycles stretch out longer and longer (or, as happened when we were camping, suddenly spring back to three weeks). My premenstrual symptoms are drawn out for weeks (I'm moody, my hair keeps falling out, I can't stand to be touched, my boobs hurt, I'm vague and breathless), and sometimes pretend to be pregnancy symptoms, and so I have wasted a lot of money on pregnancy tests, and spent a few tears on them as well. Not that we're trying, but... you know. Some months my period just arrives without fanfare. Some months it's weeks of feeling crappy, waiting, waiting. A couple of years ago I saw two different doctors and they were so underwhelming in their support or concern that I never really pursued anything (Oh, you're stressed, they said. You're a mum with young kids, that's all.) I have an appointment tomorrow, since I'm due for a pap smear anyway. I'm going to ask them to check my thyroid, and inquire about the possibility of PCOS. Yes, I've been googling. The doctor will hate me.

Today I caught a train into the city. A woman was crying into her mobile phone. She was upset because she had taken her daughter to school, and her daughter's friend had met her at the school gate and said 'I'm not going to play with you today...I'm going to play with my other friend.' Oh, I know, if it was Fred I'd be blogging about it here, squeezing my heart out soggily, but on the train I felt cruel. Man up, I thought (that's my extra testosterone that's making my hair fall out, making me cruel hearted). Get over it. 'I told her,' the woman said seriously to the person on the other end of the phone 'that they could all play together.' But that's not actually the problem, is it? The problem is resilience, and lady, you don't got it.

A few stations later, the train filled up, and the woman receded into the din. A man sat next to me. It was 9am. He was drunk, and blurred, and broken looking. He was drinking Strongbow cider, which, as he pointed out, is three standard drinks, whereas a longneck of VB is only 2.4, which he told me, would go down very well if you were having a dinner party of three people because it would divide up evenly. But he wasn't an alchoholic he assured me, and the man on his other side. He was just drinking because of the pain. He held up his right hand. It was a big meat paw, swollen and red, clearly infected, not broken, he said, but smashed. The police had done it, with a baton, held him down, when he wasn't doing nothing. For no reason. Criminals with badges, he called them. Usually he only drank for an occasion, he slurred. But he didn't believe in that other sort of drinking, the one you do on Friday night. What do you call it? Binge drinking? At one point as he talked to me he entered an oddly nostalgic dreamstate, telling me about the wonders of mixing dry ginger ale and apple juice. He gave me the recipe. Half and half. I could probably change the quantities but I should mix half and half first, and then go from there. But just mix it in the glass, not in the bottle. His parents had made it for him, he told me. And I tried to imagine him as a boy, drinking dry ginger ale and apple juice out of a straw. Where are his parents now?

I parked at the station. I parked outside the tennis court in a five hour zone. But at the library I got caught up with research and it was three when I headed back. I had a ticket. $58 worth of stupid. Man up, I told myself, and I didn't even cry.
*Blog titles. Sometimes they are hard to think up
thought up by me, Penni Russon at 8:07 PM 12 comments:

A Ladder of Books

Suddenly I have a lot of books to read. Good thing I have a new bookshelf. Martin found this ladder on the hard rubbish and did it up for me for my birthday. It sits next to my bed, in arm's reach, I don't even have to sit up. 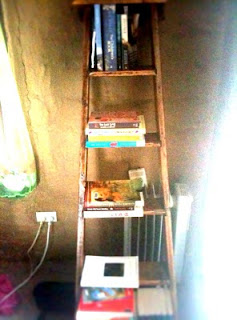 The books are sort of sorted. The top pile are books I am planning to read for pleasure. This is the pile I will go to if we have a weekend away or I have a day to kick my heels and read. I am reading Home at the moment. I am actually really enjoying taking it slow, I seem to have turned into the kind of person who reads more than one book at a time. In case you can't read the titles there's: Bloodflower (which I wrote a reader's report on an early draft of), Noah's Compass (which I am saving up for special), The Children's Book (which I am a bit scared of, it's so long!), Olive Kitteridge, and Home. 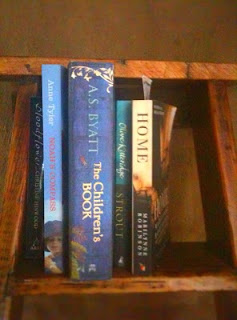 The next pile are some of the books I will be teaching this semester. I have already read Butterfly by Sonya Hartnett (she's SUCH an impressive author) and The Tall Man, which I wholeheartedly recommend - beautifully written, compulsive reading, and I felt like a better human being for reading it. The other books on the pile are The Lost Dog, Reunion (which I am reading now) and New Australian Stories. 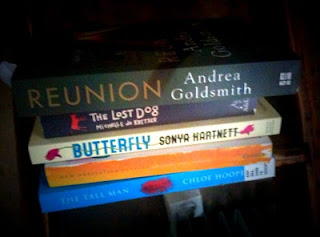 This next pile is some of the best bit of my job. The below are 'for work': Saving Franscesca and The Piper's Son by Melina Marchetta, Liar by Justine Larbalestier and Riding the Black Cockatoo by John Danalis. 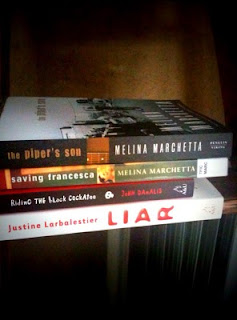 I am doing an 'in conversation with Melina Marchetta in March, mostly discussing The Piper's Son, which is a follow on from (but not sequel to) Saving Franscesca. Isn't the cover beautiful? 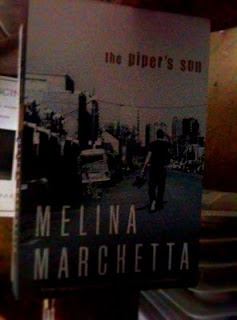 The following is a critical text by Susan Stewart about objects: On Longing: Narratives of the Miniature, the Gigantic, the Souvenir and the Collection. I am fascinating by collecting, and it forms the basis of a work in progress (which mostly exists in my head) about a miniature girl. I have also often thought that I would quite like to explore why children are so fascinated with dinosaurs (and why adults encourage and build on this fascination). I dip in and out of this. 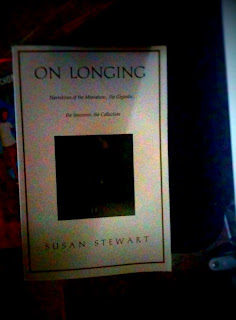 And I don't have to read the books on the bottom shelf, since I wrote them all. But perhaps you, dear reader, would like to put this one in your reading pile? 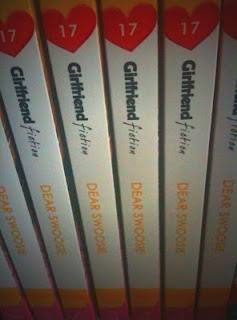 Where do you keep your books to read? What's on your pile?
thought up by me, Penni Russon at 1:03 PM 21 comments: