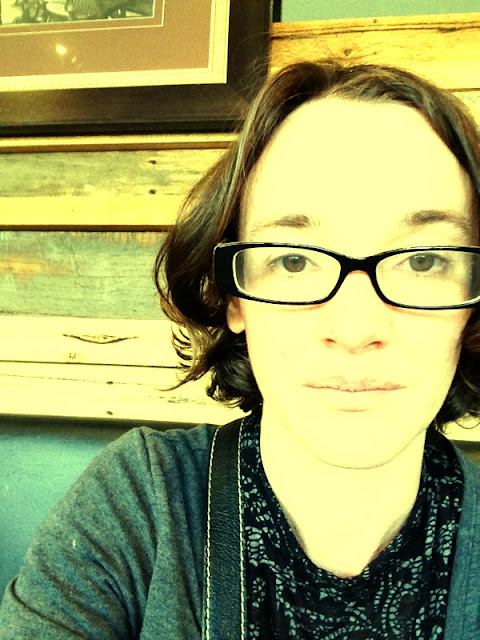 I was born in Hobart, Tasmania in December 1974, a few days after Cyclone Tracey devastated Darwin and about a week before the Lake Illawarra, a bulk ore carrier, collided with the Tasman Bridge and it collapsed, killing people on the ship, sending cars plunging into the river's depths, and dividing the city for three years. I have always felt guilty by association, which perhaps tells you something about me (self-centred, flair for the dramatic, over developed sense of culpability, fascination with loss).

My father, Robert Russon, had immigrated to Tasmania as a ten pound tourist in the 60s after his first marriage broke up. You can read a bit about my other family, who I didn't get in contact with until my late teens, in this post: The Cartography of Loss. Dad married my mum, Frances Turner and they had two daughters, first my sister Kylie and then me. Both my parents were teachers, though Mum had various jobs while I was growing up, after getting squeezed out of teaching by terrible maternity leave policies. She retrained as a librarian but couldn't get library work which put me off pursuing that career myself. Both parents said to me, as a perpetual mantra, don't ever become a teacher.

I grew up in a developing suburb in Hobart. Land was being subdivided and cul-de-sacs created. New units and brick houses were springing up and some of my early memories are playing in the wooden frames of houses half built - the wooden frames in but no walls, where you could see the rooms laid out. I was fascinated and charmed by this sort of play, and to me it was as if the house was in a state of decay, the walls melted away, exposing the skeletal remains. Around these 'works in progress' was the bush: soaring blue gums and a thick understory of bracken, ferns and wildflowers.

My childhood was wandersome and a little wild. I roamed the bush and streets of my suburb with my sister and various neighbourhood kids, it seemed there was always someone in their front yard to play with, or we ran in and out of each other's houses, or met at the park up the road, or we wandered in the bush or the suburban streets or the dirt roads. In winter it snowed and the roads would close and school would be cancelled. I met my best friend Zoe in prep, she lived five house blocks away and down a long driveway in a domed house made of fibreglass. Her parents were artists, and this entered my consciousness. It seemed a whole other way of living.

My primary school had a wonderful librarian, Mrs Jessup, and a terrific music teacher, Mr Van Der Geer. I cannot overstate the richness and joy they brought to my early education. Music was my second language, books were spaces I occupied. I sing quite well, and once fantasised about singing on stage. Now I know what my sweet but not singular voice is for: singing to my children.

I was involved in local theatre as I was growing up and wanted to be an actor until I was about sixteen when I lost heart for it. I wonder now if it was because I thought I would never be good enough, or if I believed my mother (and others) that a living couldn't be made from pretending all my life. Or if at the heart of me I wanted to tell my own stories, instead of performing other people's words.

As a teenager I wrote poetry. I studied Writer's Workshop in Year 12, the first time Creative Writing was offered as a pre-tertiary subject. I also studied history subjects, European Literature, Social Psych and Religious Studies. I was - in a bizarre alternative universe twist of events - student body president of Hobart College in 1992, running on a platform of getting condom vending machines into the school. This precipitated a year long conflict with the Education Department, played out in meetings and in the media, resolved when we (a group of students from Claremont, Elizabeth and Hobart College who banded together over this issue) took our concerns about the flawed decision making process to the Ombudsman and won our case.

I took time off after school desperate to move out of home and start living independently. I worked in childcare which paid little more than the dole, so the next year I went on the dole, which left a lot more time for reading. From childcare I learned that I hated full time employment, finding it particularly demeaning to live by an imposed schedule that stated when we could eat lunch or take breaks. I also learned that I love kids and I am inspired by the way they use language - as a malleable, organic, creative mode of communicating raw thought. You can read more about that in the post Miss Spelling, or Powm Book.

As a young adult, at the age of 21 - shortly after having my heart broken - I moved to Melbourne with a group of friends. I studied Archaeology and English and Women's Studies at Monash University. I drank and smoked and laughed. I lost friends in a car accident and grieved messily and learned that you have to learn how to grieve. I finished my degree and had a existential crisis and enrolled in a Professional Writing and Editing Diploma at RMIT. I lived in sharehouses in North Fitzroy and Clifton Hill and Victoria Parade and Northcote, until I met Martin Jorgensen in an editing class, and shacked up with him. I wrote reams of poetry and short stories. I knew I had something, an ear for sentences, a distinctive 'voice', but I also doubted that I had anything of value to say. I never sent any of that work off, frightened I wasn't good enough, but I still have everything I wrote.

I finished the diploma and worked as a freelance editor, mostly at Allen & Unwin, and mostly structural editing. I think of this as an apprenticeship in novel writing, learning how to take a novel apart and put it back together. I was up to my elbows in manuscripts. During this time I read lots of unsolicited manuscripts and it began to dawn on me that I could do better. I started writing a novel and showed it to my friend Eva. She liked it. By the time I finished a draft she was commissioning editor at Random House. Meanwhile my appendix burst, Martin and I eloped in secret in Greece and two months later I fell pregnant with my first baby.

I signed the contract for my first novel just after Frederique (my eldest) was born. I kept writing and having babies. Una was born the same month my second novel came out. Five years and several books later, in our little half mud-brick house on the outskirts of Melbourne, Avery came along. If you want to know how I balance babies and writing the answer is complicated and deceptively simple: my husband does most of the cleaning, I cook, and the robot does the vacuuming. Somehow the laundry gets washed and dried and put away. Sometimes there are long delays between these steps. The baby just ate a piece of toast from the floor because I am writing this instead of picking up toast. We tidy madly when we know visitors are coming. We don't watch television. I read less than I used to. I reinvent the wheel on a daily, sometimes hourly basis. If you can live like this, maybe you're a writer too.