I am searching for birthday presents for Una. Remember how weird and obsessive I am about present buying? How I always want just the right thing? And then talk myself out of buying anything much at all? Anyway, here I am, looking at painfully and gratuitously and for varying reasons unattainably beautiful things on the Splinter-nets. And I thought I would share my painful melancholy yearnings for these platonic ideals with you all. Because I am thoughtful like that. 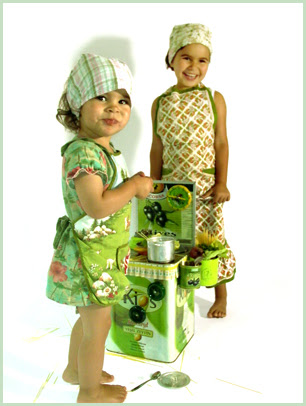 Kitchen toys made out of used olive oil tins by rafinesse and tristesse. 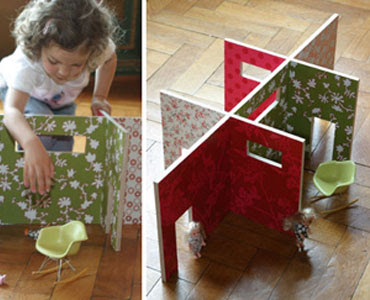 Though I fully acknowledge we ought to be able to make our own version of this, just as this clever person has done (via We Heart Books). In that other spatial dimension where time is like soup (plentiful, easily padded out to go round, and you can store extra in your bread).
I want to live in this playhouse:

And I haven't even started on Etsy.
thought up by me, Penni Russon at 8:55 PM 10 comments:

My spelling is wobbly. It's good spelling but it Wobbles and the letters get in the wrong places. Winnie the Pooh

Ponies the past went past we.


These were all in a notebook Fred writes and draws in sometimes, like a diary but without the usual sense of order a diary suggests - her pages are random, there is no indication of when each was written, though most of them were from the time of our holiday at Easter when we went to Silvers circus. The last one is a song, each syllable is accompanied by a musical note. I stumbled upon it looking for somewhere to scribble notes while she was on my computer.

In the book I found a map she had drawn with the title: I EM HAPPY. It is a map of school and she has labeled certain landmarks: CUBILAND, PLAYGRAND and CURPAK (it took me a while to realise that CURPAK, which points to a ladderish image, means carpark and while it strikes me as odd, as a grown up, that the carpark should be one of her major landmarks, I myself have a wash of odd and ambiguous nostalgia about the row of carparking spaces out the front of Mt Nelson Primary School, which is odd because I have few memories of being driven to or from school). It's testimony to how much she likes school, despite my lingering worries about the smallness of the school and the lack of facilities and opportunities compared to bigger, shinier schools.

The other day I did a talk at a lovely secondary school, and then workshops with year sevens. One of the young writers asked me 'why does a book need to be copyedited? Why should it matter if the spelling is correct as long as people can understand what's being written?' It matters because it does I suppose, but I can see her point. I am always interested in Fred's writing, I am fascinated by how unstable language can be, how stretchy it is, how unreliable the step from the spoken to the written - it seems every second word has a rule-breaker: a silent letter, or unexpected diapthong. There is pleasure that, in a way, Fred's language is still private, still held within the embrace of the family. There is pleasure in the intimacy involved in deciphering codes, an intimacy perhaps that I am betraying by sharing her writing here.

Sitting beside me on the table is a book Fred has made herself, roughly stapling together the pages, which do not quite line up. It's title is THE BIG BOOK OF SICRIS. The first page is filled with a floating mysterious question mark. The next says: "DO YOU NO ThaT PReRNS CAN Die BeFoRe CHiLDReN?" This secret is obviously so big, and so silencing, that for some days now the rest of the pages have remained blank.

This is written on the blackboard in the hallways. I discovered it walking past, and I could hear Fred in the bedroom, alone in her room, speaking aloud. There is something sinister about mispellings too, something that threatens cohesion, sanity, the order of things. Language is a series of objects we arrange. If we carefully lined our shelves with broken things: eyeless ruptured dolls, teacups with a bite taken out fo them, worm-filled apples, we would probably seem quite mad. Encountering mispellings is like seeing headless ghosts or zombies, things that have created life from the leftovers, the animated dead.

'Ponies the past went past we.'

But there is a poetry to the mispelled too. It implies an independence from authority, a boundless creativity that goes right down to the basic building blocks of language. And when they come from children they contribute to this intuitive sense that children are closer to the source than we are, the rich, wild source where imagination and creativity spring from. It is obvious that to Fred, words are as malleable as playdough, and they can be pushed and moulded as necessary.

At the moment, Una is in the bath saying to Fred, who is pretending to be deaf: 'Why do you need to not hear?' The surprising cadence of their idiosyncratic syntax informs my writing and changes the way I make sentences. I feel sometimes that I am the zombie, or the vampire, feeding off their jangling, living, dansing words, the music of their mis/spellings and mis/speakings.
thought up by me, Penni Russon at 2:18 PM 11 comments:

Things that are true that I read in a book

This is a meme. It came from Mark Lawrence, and Kirsty (what started it), and Genevieve. Encountering truth in fiction, the kind of truth that gives me a shiver, is one of the greatest pleasures of my existence.

In the old nursery rhyme, when the cat went to see the queen, he caught a little mouse under her chair; that was long long ago and the queen was different from our queen, but the mouse was the same.
Mice have always been the same.
Rumer Godden, The Mousewife

"If you're going to stop a band playing every time someone has an accident, you'll lead a very strenuous life."
Katherine Mansfield, The Garden Party