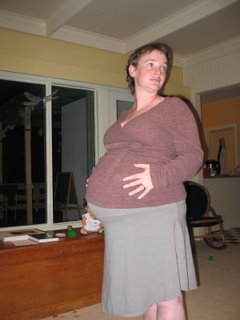 Actually this photo was taken on the 14th September, the day before my due date. Una was born two weeks later, on the 28th September. I stopped taking photos on the 14th - clearly disheartened. This year I realise how long two weeks is, we've been to Tassie, among other things. It's a long time to be so heavily pregnant. Una was 10lb1oz when she was born and 58cm long (I'm on the small side of small, five foot nothing). No wonder I was so tired. Labour was difficult, compared to Fred, but it was a natural drug-free birth and I watched her being born in a mirror that they'd set up to encourage me to push, so I could see the progress I was making. She was posterior, which meant she descended facing forwards. Her face was sealed in a thick layer of amniotic sac and the umbilical cord was wrapped twice around her neck. But the rush of love that came when she was born was amazing and I would go through it again for that feeling alone (and we plan to, sometime). They cut the sac from her face and heaved her up into my arms. I held her against me. Martin took off his t-shirt and they passed Una to him as I bled heavily and they wanted to get me up onto the bed in case I fainted (I went to the toilet later and fainted - the midwife caught me).

This time last year labour hadn't started but would by 10pm. I was worried about how Fred would cope with the change (she didn't really, not for the first few months). I couldn't imagine life expanding to accomodate another little person, though I didn't worry about love - I already loved her. I ate lentil dahl, made by Martin from his Bill Grainger cookbook (last year's father's day present). I watched some of Tales of the City on video. I went to bed early. This time last year, we were a family of three. At 3am, after we'd called Zoe and she'd driven to our house, Martin and I set off to the hospital on a deserted freeway, startling a rabbit.

Now Una completes us all. And tomorrow, when she wakes up, she will be one year old.
thought up by me, Penni Russon at 7:29 PM