Here is a list of all the Christmas crafts we have engaged in with Frederique so far this year:
1.

Yes well.
Sometimes I read Kiddley and I am struck by a strange blend of admiration, jealousy and exhaustion at the endless descriptions of craft type things people do with their children. Claire of Loobylu fame (the first blog I ever read) is the main author and is always whipping up something impressive with her seemingly inexhaustable supply of time, energy and enthusiasm. I also suspect she has a not unreasonable supply of money (why does it seem insulting to say that?) because many of Kiddley's activities assume that you have on hand expensive resources. There seems to be a big online craft community of nice middle class people who have a fair bit of expendable income and more power to them but I reserve the right to experience occasional moments of bitterness. Plus who are these three year olds that sit around making just-so things? Fred is far too chaotic to make her own snowglobe or a pinecone hedgehog. Nothing ruins her fun more than instructions. I choose to stubbornly believe this is one of her best qualities. Plus with some of these things I suspect more than a little adult involvement. When I worked at the creche we were told vehemently that process was more important than product and gave the kids materials to do with what they wished rather than set up goal oriented activities, and for the most part I've followed this approach as a parent. At three I think she's too young to do anything more than explore different materials textures, characteristics and results.
And that's what I'll keep telling myself as I scroll through Kiddley and see that i should have made my own advent calendar, christmas cards and cute yet seasonally inappropriate mantel village.

Having said all that, I did make the girls some lion noses the other day. Frederique and Una have developed a game called Daddy Lion and Baby Lion that involve them making mountains out of pillows and doonas and then clambering around. The beauty of this game is that Una doesn't need to know she's a baby lion and Frederique gets to play with Una and Martin and I have nothing to do with it. Una has even learned to growl. Una loves dressing up so I made each girl an egg carton nose. Fred wore hers for less than five minutes. Una LOVED hers and was most upset half an hour later that I took it off her to put her to bed. 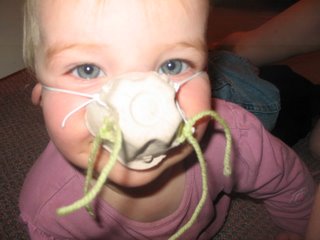